close
Like the bible but cast with night dwellers

Underworld: Rise of the Lycans 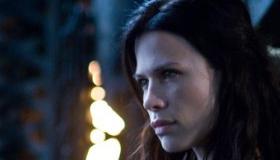 Whether or not moviegoers were clamoring for more, the third entry in the Underworld series—and the first not directed by Len Wiseman—has arrived. The prequel explains how the feud between the Vampires and Lycan breed of werewolves developed and could be entitled “Sheen/Nighy” after the two British actors who clash as representatives of distinct but related species. Conventional in the extreme, with a spare storyline reminiscent of nothing so much as a Biblical epic, Underworld: Rise of the Lycans is superfluous yet modestly entertaining thanks to Nighy and the franchise’s blend of camp and visually diverting mayhem. A dearth of formidable competition in the same R-rated vein will aid its performance.

Looking like he stepped out of a production of Jesus Christ Superstar (circa 1983), Sheen appears again as the werewolf Lucian, raised by Vampire leader Viktor (Nighy) as a favored slave. He falls in love with Viktor’s daughter Sonja (Rhona Mitra), a warrior armed with puffy lips and torn between filial loyalty and Lucian’s mix of beastly charisma and hunger for freedom. The latter’s predicament and leadership skills bring to mind Spartacus and Ben Hur, among other heroes. Nighy is a gas to watch and even more fun to hear due to his kitschy diction. He makes a meal of every word, putting a delicious emphasis on consonants and making lines drip with sarcasm. He’s hilariously malevolent; I could listen to him say, “Fetch my knives” over and over again.

Taking place a thousand years prior to the action in the first Underworld, the intimate plot is quite straightforward. Seems the producers decided not to make the same mistake a third time and so the storyline is not nearly as confusing as 2006’s Underworld: Evolution. After a short prologue explaining the relationship between Viktor and Lucian, the tension escalates when Lucian beds Viktor’s defiant daughter in a sublimely cheesy love scene. Doing his best Jim Caviezel imitation, Sheen as Lucian is brutally lashed for trying to escape. When he finally succeeds, freeing other wolves and infected humans in the process, his taste of liberty is short-lived since he’s compelled to return for his lover. A full-scale insurrection is inevitable however, and Viktor comes to regret not killing Lucian when the lupine rabble-rouser was a helpless infant.

Patrick Tatopoulos graduates from crafting creature effects and designing numerous action-horror productions to directing, though he’s also credited with creating the ferocious beasts harassing the dominant bloodsuckers here. I realize Vampires are nocturnal and must avoid the sun, but it wouldn’t detract if the production were better illuminated, say, by a modest fifteen percent. It would still be an overwhelmingly dark flick. What are they hiding? And if the CGI is so great, why can’t Tatopoulos and company slow the action scenes down every now and then? Clarity aside, there are a few cool sequences. My favorite has Lycans being skewered whilst trying to escape. And the relatively tame bloodletting includes Lucian’s stigmata-like wounds. With or without the obvious Christology, Underworld: Rise of the Lycans cannot be deemed a celluloid monstrosity, mostly because neither of its predecessors is susceptible to defilement.