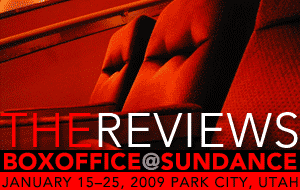 The mystery of Jim Morrison’s early death has at last been solved: he died so he wouldn’t have to watch Tom DiCillo’s tedious, reductive and factually erratic version of the story of his life. Not that there’s nothing of value on offer in When You’re Strange —for a Doors fan, this is in many ways an embarrassment of riches. There are rare recordings and some beautifully preserved footage, including Morrison family home movies, nascent music videos, concert performances and drunken studio sessions surely never meant to see the light of day. Best of all is some evocative narrative material (directed by Morrison himself) of Morrison enacting what look to be passages from “L.A. Woman,” role-playing as a restless desert drifter drawn to the City of Angels like a moth to fire. But to enjoy any of this stuff, you have to cut your way through DiCillo’s idiotic, hamfisted and virtually wall-to-wall narration, a feat a squadron of firemen couldn’t pull off if every man came personally equipped with a welding iron and the jaws of life. There was probably never going to be a theatrical market for a movie like this but DiCillo has managed the impossible feat of taking a riveting subject and a charismatic star and creating a film which barely seems worthy of airing on cable TV.

It isn’t just that DiCillo reads his relentless text as passionlessly as the narrator of an old E! True Hollywood Story, or that his script is written in the most generic tone imaginable. It isn’t even the offensive sophomore sociology bloviating DiCillo allows himself, where he constantly instructs the viewer about how to react to what’s being shown onscreen. DiCillo has also gotten his narrative exactly wrong, for he brackets his movie with the by now ritualistic boomer nostalgia montages: JFK shot, civil rights on the march, Vietnam raging and here comethe Beatles! No actually, this time it’s The Doors. And American youth is electrified. “Peace is no longer just an idea,” DiCillo intones flatly. “The spirit of change is everywhere.” Small dramatic pause. “It is the age of Aquarius.”

Well, sure it is if you’re a fan of Donovan. But The Doors were the commercially accepted version of the Velvet Underground, not the Cowsills. Morrison’s fixations were gothic and morbid—he was singing “Father, I want to kill you,” not “All You Need is Love,” and in life and art he was on a hedonistic death trip, where murder, orgasm and suicide were all conflated together in some mad quest for intensity of feeling. When Woodstock came calling, The Doors turned them down. Now DiCillo has done what every filmmaker with a ’60s pop topic and access to a film archive seems compelled to do, and imposed Woodstock upon them.

Although they appear to have refused to sit for contemporary interviews, the surviving Doors surely had something to do with this copyright stimulation exercise. It’s amazing to think they let DiCillo blather so much received wisdom and so many historical clichés over their still great music, or that they wanted a movie to be made that gets Morrison to Paris to die in that infamous bathtub but never once mentions the literary hero who drew him there—the French symboliste poet Rimbaud. The boomer need to make every story about their formative era into the same story does a deep disservice to Morrison’s unique and troubling vision, which was an important stimulus to punk a generation later thanks to Patti Smith’s worshipful attitude toward Morrison’s band.

“This much is true,” DiCillo recites when his film takes its foreordained turn for the tragic, “you can’t burn out if you were never on fire.” Which is patently false, actually, and this movie is the living proof. When You’re Strange could surely burn out any but the most devoted Doors fan. And despite Morrison’s doomed and ravishing profile, the crooning croak of his voice and the bulge he so proudly displayed in his custom-made too-tight leather pants, this documentary never catches fire even once.