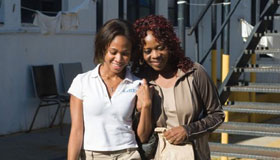 Inspired by actual events, American Violet shows a young woman's fight against a corrupt legal system to clear her name. A strong cast invigorates the otherwise conventional style of the film. Marketing to schools and activist groups could increase interest in this rousing story.

In 2000, as residents of a small Texas town watch their governor campaign for president, the local District Attorney Calvin Beckett (Michael O'Keefe) is preparing to ensure his re-election by high-profile drug arrests in African-American neighborhoods. From a helicopter he oversees officers moving like a SWAT team to arrest suspects in a housing project.

Dee Roberts (Nicole Beharie) is a 24 year-old waitress at a local diner and single mother of four girls. She lives in the project raided by police. She's taken from work by officers who falsely indict her as a drug dealer, based on the unverified charge of a police informant. Dee has no previous record and has not been found with drugs. She and her neighbors are taken to prison. Harsh details emphasize the squalid conditions of Dee's incarceration. There is a realistically detailed atmosphere throughout the film. Both director Tim Disney and writer/producer Bill Haney previously collaborated on documentaries.

Dee and her neighbors are given a terrible choice, stay in prison or take a plea bargain that trades an admission of guilt for a release from confinement. Having the criminal record would forfeit financial help from the government assistance programs the families need to survive. Dee becomes alarmed when she finds out that while she's in jail, her two youngest daughters are with their father Darrell (Xzibit) and his girlfriend Claudia (Karimah Westbrook) who neglects the girls. Her mother, Alma (Alfre Woodard, again first-rate), cares for the other daughters.

The plot follows the traditional format of the made for TV films where the good and bad characters are clearly delineated. The notable portrayals from the ensemble build interest beyond the script.

In her second film, Nicole Beharie ( The Express ), a recent graduate of Julliard, gives an accomplished performance, showing Dee's rage, fierce determination and love for her family. Dee decides to fight the charge to maintain her innocence. Alma initially favors the plea bargain deal to return Dee to her children, but eventually backs her daughter's choice. O'Keefe's Becket has an arrogant confidence in his domination of the community. Dee's pastor Reverend Sanders (Charles S. Dutton) asks the ACLU for assistance. David Cohen (Tim Blake Nelson), one of the two determined attorneys sent by the ACLU, looks for some local help. He finds Sam Conroy (Will Patton), a former narcotics officer and assistant district attorney. Sam is sympathetic to Dee's plight but is worried that aiding the fight against Beckett could end his career. He is particularly concerned as his wife is being treated for cancer. The actors successfully personalize the struggle against an unscrupulous authority, building an emotional impact into American Violet.