on February 13, 2009 by Cathleen Rountree
Print 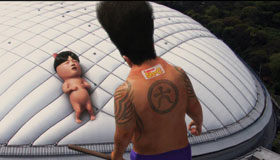 Manzai comic Hitoshi Matsumoto— Big Man Japan ’s star, director and co-screenwriter—is a phenomenal pop cultural icon in Japan. And, after busting a gut while watching the film, I now understand why. This outlandish, wickedly funny, giant monsters-filled, Japanese superhero, faux-documentary surpasses any mockumentary you’ve ever seen. I mean, seriously, Big Man is Christopher Guest on steroids and psillosibin. The spoof rocked big time at festivals from Cannes and Toronto to San Francisco as a raunchy Midnight Madness offering, so film has already taken a giant leap in the direction of future cult classic. DVD sales should be strong, but Big Man deserves a big screen!

As an employee of the Department of Baddie Prevention and a reality show host, middle-aged Masaru Daisato (aka: Dai Nipponjin or “Big Man”), with his long shaggy mane, peculiar clothes and hangdog mug, appears unremarkable enough. Sitting in Daisato’s kitchen, an off-screen TV interviewer asks him Barbara Walters-like inane questions: “Do you cook your own meals?” “Is that your cat?” “How much money do you make?” Soon we realize that the poor guy’s a virtual prisoner in his own home because “I never really know when work will pop up,” and he’s got to be around to rise to the challenge. His wife has left him and denies him visitation rights with their daughter, and he has to deal with his Alzheimer-afflicted grandfather. And to make matters worse, his TV show has fallen from prime-time popularity to early-morning insomniac fare.

So what’s his work? Why, he’s a sixth-generation monster-buster. When those pesky ogres (they’re too preposterous to be scary) start destroying Tokyo’s buildings and terrifying its inhabitants, who you gonna call? When the phone rings, Daisato jumps on his scooter and chug-a-lugs up the mountain to the nearest electrical power station. With a few jolts of juice through his nipples (and a little CGI), our everyman slips on a purple Speedo and voilá, he’s the Incredible Hulk, Japanese-style, albeit with Eraserhead hair

From the country that brought us the fire-breathing Godzilla, comes a new bevy of surreal Baddies: Mean-Look Baddie, Smelly Baddie (who emits the odor of “the feces of 10,000 humans”), Squeezing Baddie, and Jumping Baddie. Can Big Man save the day?

With a running time of just under two hours, the film could lose 20 minutes or so. And the final battle scene veers off-track when the trio of superbeings-from the U.S., Japan and North Korea-resemble Teletubbies more than monsters. But those are minor grievances. The immensely amusing Big Man Japan proves an inventive parody and wry commentary on working class existence, pop culture, insidious product placement, and, yes, our necessity for superheroes--even the weirdest one imaginable.