close
Tongue in cheek—and some other places 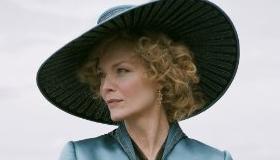 The reteaming of director Stephen Frears, writer Christopher Hampton and star Michelle Pfeiffer, 20 years after their garlanded work on Dangerous Liaisons, proves a potent and heady mix in this tale of an ageing courtesan and her much younger lover. Expect box office jingles and critical appreciation.

It’s always a risky business to reassemble similar elements and expect them to work all over again - especially two decades down the line. Yet this reunion works with all the joie de vivre and effervescent bubbles of vintage champagne.

Adapted from two novels by Colette (who wrote Gigi ), it is set in the 1920s Paris of the Belle Époque, where manners were impeccable and pleasures plentiful, especially if you’re a 19-year-old beau with good connections. Chéri, the nickname given to Rupert Friend’s character, meets Lea (Michelle Pfeiffer’s mature courtesan) when his mother Charlotte (Cathy Bates in fine rumbustious fettle) pays a visit to catch up on gossip.

Soon Friend and Pfeiffer are providing all the gossip anyone could require as they embark on a passionate affair that goes on for more than six years. Unfortunately for the two lovers, Bates has other ideas for her son—namely the innocent Edmee, who is just 18 (and played by the very girly Felicity Jones).

The 50-year-old Pfeiffer, showing all the vulnerability of an older woman in the face of a younger rival, withdraws from the fray and heads for the greener pastures of Biarritz to find other amours. Neither Lea nor Chéri, however, find the same passion with replacement partners and soon they are reunited in Paris.

Hampton’s lines, many of which come directly from Colette, are a joy to hear—barbed and acerbic witticisms that speak volumes such as Bates’s delicious putdown of Lea when she notes that “when the skin is a little less firm, it holds perfume so much better”
Pfeiffer and Friend make a credible pairing, with the young man adopting almost feminine wiles in his machinations with the opposite sex. Frears himself provides the linking narration that he delivered with equal wit and wisdom.

It is all beautifully costumed and set—items that should not be taken for granted—and the supporting cast more than pass muster, especially Harriet Walter and Frances Tomelty.

Let’s hope that Frears and Co. don’t leave it so long before the next collaboration.