close
Audiences will devour it. 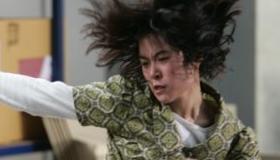 Prachya Pinkaew, director of Ong Bak: The Thai Warrior, shakes up the martial arts world once again by introducing a most unusual action star. Not only is the fighting heroine a girl, she’s mentally disabled—autistic to be exact—and this double whammy renders Chocolate the most entertaining martial arts film to come along in quite some time. Mixing sweet flavors with savory violence, it makes you look at the genre with fresh eyes. A must-see in chop-socky circles, Chocolate will also appeal to those not steeped in martial arts films and to anyone who simply relishes watching a girl with limitations—who isn’t an Asian automaton or lethal Stepford model—kick butt.

A forbidden affair between a Bangkok gangster’s moll named Zin (Ammara Siripong) and a handsome Japanese yakuza (Hiroshi Abe) results in the birth of a “special child,” christened Zen by her mother. Banished from her crime family, and with Zen’s father having returned home to Japan, Zin raises her kid next door to a Muay Thai boxing studio. What Zen lacks in emotional and mental maturity, she more than makes up for with heightened vision, hearing and reflexes. She’s so sensitive to sound that the beating wings of flies freak her out. She spends her time watching Bruce Lee and Tony Jaa movies; and the title comes from her favorite comestible, which rivals Popeye’s spinach for the ability to bestow strength and agility, and which should gain even greater acceptance as a wonder food. Her chubby, doting cousin Moom earns pocket funds by having Zen perform in the street. But when Zin falls ill with cancer and they need money for medicine, they put her talents to better use by collecting the debts that businessmen owe Zin from her days as a thug.

Having trained for five years to play the older Zen, twenty-three-year-old JeeJa Yanin is now a force to be reckoned with in Asian cinema. Prone to fits, her character lapses into a prolonged, twitchy yet hyper-focused state before erupting to dispatch a steady stream of combatants. In battle, she’s vicious, acrobatically availing herself of any weapon and showing no mercy whatsoever. Three of the terrific sequences during which she fells hundreds of foes take place in an ice factory, candy wholesaler and slaughterhouse. And just when you think things can’t get any more wonderfully bizarre, Zen squares off against an autistic boy. They engage in a brief, beautiful skirmish that echoes the last dance on prom night. When the grudge between her parents and the malevolent Thai gangster come to a head as expected, Chocolate concludes with a nifty climax set on ledges high above a city street.

Pinkaew doesn’t overdo them, but there are poignant, tender moments between mother and daughter. Amidst all the fighting, Chocolate expresses a genuine respect for the hidden talents of people like Zen. Two other noteworthy elements are an anime dream that inspires her to embrace her calling as a fighter and a group of hench-trannies that include the villain’s right hand man/woman. Kudos to Panna Rittikrai and Weerapon Poomatfon, who oversaw the fantastic action choreography, which is enhanced by rich sound effects. The fights are also hilarious, as Pinkaew and company dot them with visual jokes. Don’t miss the outtakes that roll alongside the end titles; they show actors and stunt men, including Yanin, sustaining relatively minor if painful injuries during the shoot.

Pinkaew now has two sterling martial arts movies under his belt. 2003’s Ong Bak made tons of money and cemented the reputations of both director and star Tony Jaa, lifting the Thai movie industry in the process. Similarly fresh and uniquely humane, this should do the same. Anyone who feels the martial arts sector could use a swift kick in the posterior will devour Chocolate.