close
Can we call it Consumer-Porn?

Confessions of a Shopaholic 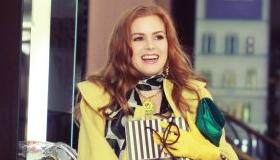 Poised for a Valentine's weekend release, the new fashion-centric romcom by Muriel's Wedding director P.J. Hogan is as an odd hybrid of pretty and partially digested. On the heels of He's Just Not That Into You, a film that faced a critical blast to be dwarfed by the fate of Shopaholic, this exercise in capitalist wish fulfillment is not unlike a Depression Era Studio Fantasy. Featuring women who struggle financially only to find happiness in the arms of recession-resistant men and fat-cat magazine publishers [yes, you read that right] who are hunks ready to take massive risks without the slightest R&D, this flick is shakey uplift with minor merits. Shopaholic bandies in the same brand of humiliation-humor that made Sex and the City (and Forgetting Sarah Marshall to provide a masculine equivalent) seem so sincere. That plus the glam of celebrity stylist Patricia Fields are viable draws, just not ones destined to last beyond a two week drop off.

Rebecca Bloomwood (Isla Fisher) is a journalist who, from young, has found practicality poorly suited to her. Her parents, warm-hearted spendthrifts (John Goodman and Joan Cusack), were so different from her she sought identification outside of her home and her personal life: primarily through fashion. This is how we gain access to the issue of her addiction, which is handled oddly and intermittently, but with some clarity. What Rebecca is good at (or rather, we learn she's good at it because she writes one article that sweeps the nation), is writing. She pens a piece under the pseudonym "The Girl in the Green Scarf" that uses fashion as a metaphor for investments and in so doing makes the premise of saving money (something we all have within our reach to understand) finally clear to the common man. So while she plays Martin Luther to the financial institution, instructing the masses in the ways of power, she comes slowly unraveled under the weight of her own massive debts. Hypocrisy or irony: Your choice.

Editor Luke Brandon (her opposites-attract love interest played by Hugh Dancy) instructs her in the simple but weighty distinction between cost and value and when her dire debt situation is made public, she ends up pitting her credit issues against his hard-built credibility. The rules of economics are never far from this love story, even if they’re spooned out in easy to digest servings (probably true to the spirit of Rebecca’s writings—which we’re never lucky enough to hear...I wonder why).

It’s easy to see a film that fetishizes YSL and Prada as a slap in the face during economically hard times. Sophie Kinsella’s original books (upon which the film is based) came out in 2000, just shy of the dot com bust. So, why release this title now? Add this question to the morally awkward characterization of the titular Shopaholic as a vivacious, fun-loving, inspiring woman with an uncanny knack for duping her boss and her debt collector (could you call her a con-artist?) and you’ve really got something to ponder. That Rebecca is most creative when cornered by money troubles is a value at odds with our more common view of commerce (and by extension civilization) as something that sucks out our spirits. But this film, with workmanlike direction and occasionally pronounced cinematography is a can of worms squirming in opposing directions. Character motivations are continually hard to gauge outside of the obvious melodrama at play, and the chemistry between the main love interests relies so heavily on head tilting you would think the actors suffer from Swimmer’s Ear. Thin on plot and heavy with criminally underused talent (Lynn Redgrave plays “drunk woman in the bathroom,” I’m not kidding) the film is a trifle, but if we found that sort of thing comforting in 1931, we’re likely to find it somewhat comforting today too.