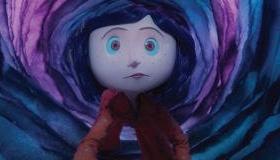 If 3D moviegoing ever catches on with audiences in any significant (read: financially viable) way, the industry will look back and realize that Coraline was ahead of its time. Not because director Henry Selick force-fed his latest stop motion marvel with “look ma, I’m 3D!” antics meant to show off the technology. But because he merely sprinkled 3D pixie dust onto a story that would hold up equally well in 2D. Using 3D as a tool of storytelling, not the whole toolbox, is the direction the format must go, once audiences tire of horror movie psychopaths throwing axes at the screen. Such measured applications of technological wizardry places more pressure on the story to stand on its own, and this moody fantasia about a neglected 11-year old girl who finds a more loving family behind a secret door of her isolated home, does have a slow and drifty midsection. Still, kids and adults will be satisfied, if not energized, placing Coraline in a respectably middle-class box office neighborhood.

Coraline is based on the 2002 book by Neil Gaiman, and his sensibilities match up well with that of Selick ( The Nightmare Before Christmas ), who has turned the literary heroine into a wonderful little scamp whose roundish head and weary attitude suggest Lucy Van Pelt as animated by Rankin-Bass. Voiced by Dakota Fanning with charm, precociousness and a hint of sarcasm, bored and lonely Coraline has recently relocated to an isolated Oregon apartment complex called The Pink Palace. Her parents (Teri Hatcher and John Hodgman) are inattentive and dismissive, preferring to work on their gardening catalogues. When her father suggests she occupy herself by counting all the windows in their house, Coraline discovers a secret doorway covered by wallpaper. By opening the door and crawling through the soft, blue-hued corridor beyond, Coraline takes her place alongside two other literary heroines on magical adventures, Alice (as in Wonderland ) and Dorothy (as in Oz ). But unlike the classic stories that bore those early 20th century characters, Coraline is a chilly fantasy of the Roald Dahl variety that skirts the safest edges of adolescent horror, both external (scary creatures) and internal (fear of, amongst other items, parental neglect). At first, however, the passageway deposits Coraline into a world very much like her own, except with beautiful, bursting colors and adoring parents who cook sumptuous meals and write songs in jaunty tribute. It’s a little girl’s dream except that Other Mother and Other Father, as they come to be called, have black buttons for eyes, which is to say her attentive, gushing parents have no souls.

Selick stays faithful to the source material, but when focusing on its supporting characters the movie loses its snap. Selick has added a couple of new players, most importantly Wybie (Robert Bailey Jr.), a neighborhood boy who in the alternate world is rendered mute (which is fine by Coraline). Characters ported over from the book include the burlesque duo of Miss Forcible and Miss Spink (Jennifer Saunders and Dawn French) and Dali-esque Mr. Bobinsky (Ian McShane), the mustachioed Russian ringmaster who uses smelly cheeses to coax his mice into performing complicated circus tricks. And the Mouse Circus, along with Forcible and Spink’s wild Music Hall performance showcase the beauty, detail and difficulty of the stop motion process. Most Henry Selick films are trips into a sweet and beguiling nightmare and here he stays at child’s eye level, letting the 3D process subtly reinforce how a youngster’s imagination can be more vivid and real than reality itself.

Most youth-targeted adventures come down to the hero learning to swallow her fear and use her ingenuity to save the day. In Coraline, our brave and curious pixie escapes her fantastical prison, but must return to face Other Mother and rescue her real parents and the spirits of three imprisoned children. It’s a wild climax reminding us that between the stop motion animation and the 3D imagery, Coraline doesn’t lack for techno-toys. But while Selick’s movie flies, it doesn’t soar. At his best, Selick tells of people discovering the true nature of the world and themselves, but his real knack is mixing surreal visuals with funhouse energy. Coraline has those elements, but the mixture has inconsistent fizz because this story of a girl learning to be resourceful and appreciating what she’s got is new in the seeing, yet feels old in the telling. What Coraline has is a plucky and sassy little girl who’s a gas to spend time with. After 100 minutes, you’ll follow her anywhere. Although the next time she finds a mysterious doorway to an alternate world, let’s hope she keeps it closed.