close
An oversimplified physic to a too-complicated problem 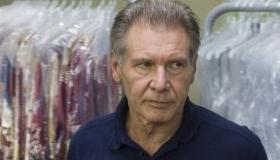 The hot button topic of illegal immigration may have allowed CNN’s Lou Dobbs to manufacture a place for himself in the cable news blowhard-o-sphere, but on the plus side, it might motivate director Wayne Kramer to seriously rethink his career choices. After the stylish and Oscar nominated The Cooler, he stumbled badly with the pointless bludgeoning of Running Scared. In Crossing Over, he proves inadequate to the task he’s set for himself, as director and writer of an all-angles examination of the troubles and choices involved in becoming a United States citizen. Harrison Ford, presumably regretful for passing on Steven Soderbergh’s Oscar-winning Traffic, takes sloppy seconds as a beaten-down, heart-of-gold Immigration and Customs Enforcement (ICE) officer. Much like Soderbergh’s masterwork, Kramer follows numerous and disparate characters who occasionally intersect. Unlike Soderbergh’s masterwork, Kramer can’t make us care about any of them, because he lacks the humanist touch and some of the crime scenes are downright laughable. Harrison Ford fans won’t be interested and topical film buffs won’t be impressed, meaning a quick cross over onto DVD shelves.

No one doubts the path to U.S. naturalization is a long, maddening, unfair and seemingly arbitrary tangle for even the most sincere citizen-seekers. Kramer approaches the problem every which way, starting with Max Brogan, (Ford) an ICE agent of such world weary gallantry that after his latest garment factory roundup leads to the deportation of a young mother (Alice Braga), he takes it upon himself to deliver her son back to Mexico. This kinder, gentler federal agent (“everything is a humanitarian crisis to” Max, we’re spoon-fed) is partnered with Iranian Hamid (Cliff Curtis) whose soon-to-be-murdered sister is dating a print shop owner with a side business fabricating citizenship documents.

The film takes place in Los Angeles, which is synonymous with Mexican illegals. Kramer broadens the problem’s scope, but his vision is still pinched and obvious. Claire (Alice Eve) is an Australian wanna-be actress who agrees to become a veritable sex slave to immigration honcho Cole Frankel (Ray Liotta) in exchange for pushing through her naturalization papers. While such transactions probably happen somewhere, it betrays Kramer’s sensibilities that his argument requires a naked girl, something the similarly kaleidoscopic Crash (also set in Los Angeles) didn’t feel it needed.

Repeatedly, Kramer’s hackier leanings overtake the better judgment he may not ultimately possess. Rock bottom is reached during a convenience store shootout featuring young Korean Yong Kim (Justin Chon) reluctantly running with gun-toting punks who’ve brainwashed him into thinking “all they respect” in America “is balls.” At the end, the terrified Yong holds a gun to a woman’s head while helpfully noting that his naturalization ceremony is the next day. You can really learn a lot about someone when they’re holding hostages, especially if their dialogue is awkward. And the swearing-in, at the L.A. Convention Center, plays like an episode of a bad cop drama. Ford has spent so many years grabbing paychecks that it’s almost a relief when he gets all Air Force One at the ceremony by confronting Hamid about the “Cold. Blooded. Murder.” of his sister. And Quinn Martin himself couldn’t top the moment when authorities nab the fleeing bad guy while quipping how unpatriotic is it to leave during the National Anthem.

These detriments never call into question Kramer’s sincerity, but they do show that sincerity is not his strong suit. Nor is subtlety, which is lacking in the story of high schooler Taslima (Summer Bishil). The Muslim-born teen gets herself and her family into major trouble after delivering an oral essay in class that sounds distressing pro-9/11. But Kramer can’t claim misguided youthful indignance when Taslima’s presentation is so incendiary that the audience will be reaching for their cell phones to arrest the actress playing her. All sympathy is permanently lost after the Feds roll in and note Taslima’s World of Islam website account, her diary entries about suicide and her pissy, pointless debate with authorities. Taslima’s attorney is Denise (Ashley Judd), a walking NPR affiliate (her necklace is shaped like Africa) hoping to adopt a Nigerian girl, much to the annoyance of her husband, who happens to be Cole.

As a South Africa-born immigrant, Kramer should have done better, even if there’s nothing in his previous work to suggest he could generate the necessary level of anger at our broken system and empathy for its victims. He even managed to lose the services of Oscar winner Sean Penn who, if reports are true, asked to be cut from the film because he disapproved of a particular story point (not to be revealed here). And he does Ford no favors by neglecting to provide a clue as to why Brogan’s attitude had softened compared to his gung-ho cohorts. The best you can say is that Kramer is ambitious enough to present the problem. Yet he’s too unsophisticated to tear off any painful societal scabs or materially add to the debate. The illegals are all saintly sorts forced to make bad choices thanks to our unfeeling government. But if the problem were that clear-cut we wouldn’t need this movie. Like the L.A. freeways that Kramer employs to represent a monolithic system that dictates the traveler’s direction, the problem is complex: too complex, alas, for this film.