close
Not quite worth cheering for 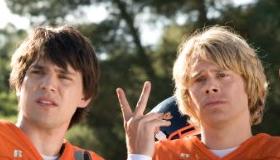 A guilty pleasure—emphasis on guilty—the high school sex comedy Fired Up tails two tomcatting gridiron studs to cheerleading camp where they aim to have the pick of each pom-pom squad. Moviegoers should approach the groan-and-groin fest armed with a pack of bubblegum and a virtual shot of penicillin. Most of the laughter is of the semi-mocking variety and you’ll want to be protected as the screen specimens fixate on each other’s privates. The raunchiness is almost exclusively verbal, but the ribald patter is vivid enough to warrant taking precautions. And although the proportion of sexual banter to actual sex is out of whack, even for a PG-13 film, Fired Up is never dull. Its financial prospects were boosted in advance by the MPAA ratings board and will be, on release day, by a lack of any new competition for the slatternly teen demographic.

Fired Up is both smarter and dumber than necessary, vacillating as it does between being a parody of teen sex comedies and a fresh example of the subgenre. Its satirical guise partially shields it from being ravaged as formulaic and unoriginal, yet a considerable amount of thought and energy has been devoted to making the project seem more than a memorable parasite. This internal contradiction is evident in the conflicting age signals the movie sends. While calculated to appeal to hormonal, pop-culture drenched adolescents, it has a 1980’s, Porky’s aura.

Not only do most of the cast members look as though they’ve long since graduated high school, the jokes skew older than the pertinent age bracket. The gags aren’t too mature or inappropriately vulgar; rather, they play as if written by someone nearly a full generation older than the characters. References to John Lennon and Molly Sims, who plays a hot thirtysomething, reveal this unease. The screenplay is credited to Freedom Jones, apparently a pseudonym for an individual (director Will Gluck? Diablo Cody in cut-rate stripper mode?) or, more probably, a committee of quipsters. Who wouldn’t want to take credit for lines like, “The closet door is made of all kinds of wood?” The sheer number of metaphors and silly phrases deployed to describe sexual activity, sexual proclivities and erogenous zones explodes the concept of a double entendre. In one sense, it’s a waste; in another, you appreciate the effort, even when bits fail to arouse laughter.

One can imagine Fired Up! being passed over by the Adam Sandler, Will Ferrell/Adam McKay and Judd Apatow camps. That’s just as well, since it cries out for modestly seasoned, no-name actors who are appealingly fit and reasonably funny. Nicholas D’Agosto and Eric Christian Olsen portray Shawn and Nick, star football players at Gerald Ford High in downstate Illinois. Their sublimely smarmy rap with the ladies pays out in the only kind of dividend they care about. Instead of roasting at football camp in El Paso, listening to their foulmouthed coach (Philip Baker Hall) drop the s-word for two weeks, they hit on the idea of attending cheer camp. Shawn’s entrepreneurial little sister smoothes the way and, upon arrival, they hook up with a steady, eager stream of girls—though all we see is a kissing montage or two. Shawn hears the siren call of monogamy after falling for classmate and squad leader Carly (Sarah Roemer), who’s saddled with a hateful boyfriend. For his part, Nick pines for the camp coach’s wife (Sims).

Having mined all it can from the leads’ prowess and stereotypical shtick such as their neat-freak gay roommate and the lecherous lesbian on their cheerleading team, the panting picture winds down. A few topical references to the economy and Barack Obama are thrown in, as if they’ll make it seem more au courant. But, judging by this list of things that are slammed—Crocs, network television, The Olive Garden, Red Lobster, Gerald Ford, George Bush and Nathan Lane— Fired Up! is hardly cutting edge. Even the movie references are a tad dated: Animal House, Meet the Parents, Hepburn and Tracy. The entire camp reciting the dialogue from the cheerleading drama Bring It On is chuckle-worthy, as is the way the product placement for Staples gets jammed into the story.

The tech credits for Fired Up! are serviceable, save for bad cutaways during the cheering sequences that allow the principals and stunt people to swap places. The soundtrack, a non-stop compilation of rap covers and rhythmic pop tunes, is the only piece of the movie that’s genuinely in vogue. Accomplishing most but not all of what it attempts, Fired Up! may give credence to the marketing mantra that there’s no such thing as a good or bad movie, only movies that find the right audience and those that don’t.