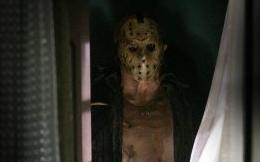 Even by slasher standards, the bar for a satisfying Friday the 13th entry is unabashedly low: Take teens, kill. Let Freddie wrestle with postmodern questions of identity, Leatherface with class snobbery, Michael Myers with child abuse and Jigsaw with baroque morality. But this latest Jason movie knows all it has to do is dispatch six people before slapping the title across the screen. It does, we laugh, we leave and Jason's producers merrily count their cash and plot his next resurrection.

That laughter is key; Friday movies are made to let the audience chuckle in satisfaction at every kill. They're both simple-minded and knowing, taking pains to assemble a gang of victims whose deaths don't matter a damn. The various walking corpses in Marcus Nispel's new entry are triumphantly inarticulate—without exaggeration, there's hardly a line of dialogue that doesn't reference sex, drugs, booze, or blood. The ill-fated youth are such red-blooded 'Mericans, they'll only drink Pabst, not Heineken. They're so horny, they jack-off to fully dressed models in winter catalogues; so stoned, they lovingly name their bongs. And their stupidity is the stuff of legend: one doomed hero is so dumb that in a kitchen full of deadly implements, he grabs a wok.

Alpha male Trent (Travis Van Winkle, whose name unfortunately recalls a certain disgraced rapper), the head of this posse of fatalities, competes with Derek Meers' Jason to be the film's nastiest villain. We meet him telling a stranger named Clay (Jared Padalecki) to ‘shut up already about his missing sister Whitney’ (Amanda Righetti) last seen camping near Crystal Lake. Trent has the blonde curls of a King Prick and the face of Tom Cruise; we can't wait for him to get axed and that's precisely the point. How much worse would we feel if Jason went after the middle-aged and sad? The only plothole we actually care about in Damian Shannon and Mark Swift's script is that Trent somehow has friends willing to drive out to his parents' luxury cabin in the woods despite them all obviously hating his guts. Even girlfriend Jenna (Danielle Panabaker) doesn't hesitate before riding off with Clay on a hunt for his sister. Not that Trent minds—within hours, he's straddled by a buxom blonde (Julianna Guill) who in an inspired lampoon of Lauren Bacall's cigarette scene in To Have and Have Not instructs Chewie (Aaron Yoo) on how to pucker up and blow out a flaming shot.

In recent years, directors have kick-started all the major slasher franchises with dark origin myths. Nispel shuns sympathy for the devil—our only thin sketches of Jason's life between slayings come from the interior of his house in which a locket of his mother hangs next to a dozen whistles from decayed camp counselors displayed like deer heads. How does he manage to sniff out nubile flesh at twenty football fields? How has he avoided the eye of the law? Why does he suddenly about face and whack a few locals? Who cares—it's just more deadly nonsense from the franchise that flaunts it with every preposterous installment that has used séances, electricity and audience apathy to keep the consciousless killer machete-whacking through the woods to our sadistic glee.