close
They’re not The Beatles, but the tweens will swoon 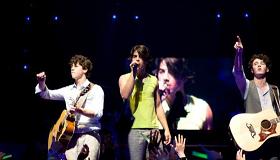 There was a moment, and this moment might have come after Kevin, Joe and Nick Jonas sold out Madison Square Garden, or possibly after they landed the cover of Rolling Stone, when group patriarch Kevin Sr., turned to group matriarch Denise and said, “aren’t you glad we decided to have a third child?” Because two’s a coffeehouse act, but three’s a phenomenon. And the Jonas Brothers, at a time when the music industry is struggling to dig itself out of a deep and well-earned grave, have become a mighty force amongst the tween and teen set. Granted, since the emergence of the Disney-controlled, pre-pubescent celebrity mill, the tween and teen set do not have a great track record in picking artists to shriek about. But the Jonas Brothers, grading on a mighty curve, are actually okay. And their first concert film, in 3D no less, is guaranteed to scale the monetary heights of that other extra-dimensional behemoth, Hannah Montana & Miley Cyrus: Best of Both Worlds. That it’s actually a pretty bland look at young heartthrobs who make impressionable girls explode over pleasantly average music won’t matter a wink to the braces-and-homework crowd.

It’s tempting to dismiss the JoBros as another manufactured band pumping out inoffensive, generic schoolhouse rock. It’s tempting and, at times, justified. But their guitar sound is satisfyingly chunky and they’re not afraid to employ more than three chords per tune, making them no worse than whatever crap currently spews from the auto-DJs that control, Skynet-like, Top 40 radio. But if the boys are dreamy and smooth enough for that pink iPod on the ride home from school, that doesn’t mean they have the juice to carry a 76 minute documentary. And at 76 minutes, the movie is still too long. The centerpiece is live footage from their Burnin’ Up tour shot at New York’s Madison Square Garden and the Honda Center in Anaheim, CA. The arenas are filled with glowstick-waving girls who hyperventilate at every non-threatening gyration and single-entendre lyric (although their new album title, “A Little Bit Longer” could be a harbinger of additional entendres). Collectively, the boys have a professionally mechanical and pose-filled stage presence that crystallizes into pleasing phoniness with director Bruce Hendricks’ cheesy use of 3D. Guitar picks and drumsticks fly (with CGI enhancements) directly into camera and Hendricks relies too heavily on extreme close-ups, as if swooning teens will think 16 year old Nick or 19 year old Joe or legal adult (21 year old) Kevin is serenading them personally. There’s plenty of fireworks to liven things up, and in one song, the boys stand on hydraulic podiums and are lifted about twenty feet in the air. It makes for a kid-tested, mother-approved evening of running and sweating and singing and playing, even if all that energy never translates into an energetic movie. And since this is a Disney product and Disney owns a record label, time is set aside for 16 year old Demi Lovato to warble a generic song of girl empowerment. Appearing towards the end is country music toothpick and Radio Disney staple Taylor Swift, singing the unremarkable “Should’ve Said No.”

Maybe because the boys are, added together, younger than Elvis Costello (a musical influence on the brothers), the non-concert interludes provide no insight into who they are or where they’re from. Really, though, this is a slightly unfair criticism. Teen girls blowing their allowance on a seat to this film don’t want The Last Waltz, they want a parent and conflict-free environment where the boys can nudge their burgeoning sexual imaginations from adorably chaste to just a bit curious (the film’s only disturbing moment has the brothers grabbing fire hoses mid-concert and spraying the mostly female audience with a foamy white substance). But it’s still a problem that the interstitial material is comprised of playful yet uninspired time-wasters. The Beatles are mentioned twice (an evocation justified by fan rabidity, if not musical creativity), first in a Hard Day’s Night -style escape from screaming Manhattan fans, and later in a cable news report featuring the Fab Four on The Ed Sullivan Show. There’s also a brief and unnecessary interlude with the Fake Jonas Brothers, three look-a-likes found on YouTube, and shots of teen girls waiting in line for in-store appearances. What’s missing is anything to spotlight the personalities of the New Jersey-born brothers, an omission that could mean they are, in fact, the soulless, corporate robots their detractors fear them to be. Indeed, to the untrained eye (i.e.: men), the brothers are basically interchangeable. The only standout player is honorary brother Robert Feggans, their obese African-American wrangler, who fancies himself a rapper.

In this age of Ashlee Simpson, Britney Spears and other Svengali-guided, market-driven non-entities, it’s still a fact that any teenager who can get on stage and entertain 10,000 screaming fans for two hours is worth, if not respecting, at least acknowledging, no matter how awful their music (in contrast, how many arena shows did you perform at 16?). The Jonas Brothers seem to be a better cut of bad meat, and if their new Beatle-esque single “Love Is On Its Way”, which debuts at the film’s conclusion, is any indication, they have an interest in expanding their now-limited musical horizons. Otherwise, everything here is passable, with “passable” meaning “The Second Coming” to young fans who don’t know any better. Soon, though, the average Jonas Brothers fan will be off to college (where recreational drugs will enable them to see the world in 4D or possibly 5D) and exposure to more interesting music. Whether Kevin, Joe and Nick plan on providing that music is a question not answered in this movie. What is apparent is that if they wanted to, at least one of them probably could.