close
For a comedy set in jail, it’s strikingly inoffensive 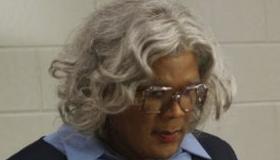 Madea does go to the slammer in Tyler Perry’s latest. Problem is, the time she serves isn’t nearly as outrageous it might have been. Other impediments to the success of Madea Goes to Jail concern the less-than-energetic realization of the comedy-drama’s worn template. But unless you want to incur the wrath of this larger-than-life matriarch, heed the movie’s message of forgiveness and try to enjoy. Perry’s popularity combined with the mere promise of Madea raising hell behind bars should guarantee a substantial number of moviegoers are going to do just that.

Anyone familiar with the franchise will know that Mabel M. Simmons a.k.a. Madea is no Georgia peach and that Tom Jones singing “She’s A Lady” over the opening credits is meant facetiously. The extent of her rap sheet may come as a surprise however. She’s a true scofflaw. A genuine threat to law enforcement. Her latest run-in with the police is caught on tape and she’d be headed directly to the Big House if the black-and-blue officers hadn’t neglected to Mirandize her. She’s sentenced to anger management therapy with Dr. Phil instead.

The melodramatic chunk of the plot, based on one of Perry’s more prominent stage plays, revolves around two Assistant District Attorneys (and stock Perry characters) engaged to be married. Josh (Derek Luke) is a stand-up guy from the ghetto—honest and self-made; while Linda (Ion Overman) is a light-skinned Black American Princess—shallow, materialistic and born to a wealthy family. Their marriage plans hit a snag in the tawdry form of Candy (Keshia Knight Pulliam), the junkie prostitute arraigned right before Madea goes before the judge. Josh and Candy know each other and he’s intent on helping her turn her life around, which entails rescuing her from a Latino pimp. It’s not clear whether Linda is more upset about their murky history or the fact Josh lets Candy wear her silk robe. Deep down Candy wants to go straight but can’t move past something in her past involving Josh.

The proportion of soapy relationship angst to humor favors the former, although there’s less abrupt back-and-forth than in past Perry films. Candy’s saga and the friction it causes between the affianced lawyers dominate. There’s less bickering between Madea and her brother Joe (also portrayed by Perry), possibly because he’s attached a bong to his oxygen line and is too busy hosting parties and singing the praises of pot and Viagra. Other than her toe-to-toe session with Dr. Phil—whom she befuddles with her anticipatory eye-for-an-eye philosophy: slap their cheek before they slap yours—the only memorable scene is the one that gets Madea incarcerated. Even it has a serious ring to it. When an obnoxious woman in a red sports car steals Madea’s space in the K-Mart parking lot, she beseeches Jesus to stop her from doing anything rashand then spots a forklift. The episode struck me as more righteous than felonious or funny, and the most incendiary line in it (and arguably the whole movie) —the woman referring to Madea as “Jemima the Hut” —is barely audible.

Oscar nominee Viola Davis ( Doubt ) plays Ellen, a minister devoted to helping prostitutes clean themselves up and leave the streets behind. (Good thing the votes have already been counted because Perry’s writing doesn’t allow Davis’ talent to shine.) Ellen takes an interest in Candy, but her message doesn’t sink in until Candy and Madea finally arrive together on the same bus at the penal facility where she preaches. Turns out Madea looks pretty comfortable in an orange jumpsuit and her prison-issue big-and-tall smock. Unfortunately, her abbreviated stint on the inside is a let down. Her cellmate—a kooky Latina serial killer—is the funniest part. Madea’s tangle with a butch inmate called Big Sal—Heidi on Human Growth Hormone—is anti-climactic. A few months and a few cornrows on Madea’s noggin later, Candy is born again, having absorbed Ellen’s sermons about forgiveness and having taken to heart Madea’s insistence on personal responsibility and forswearing victim-hood. To round things out, justice is served when Josh comes to his senses about Linda, whose 89% conviction rate is shown to be bogus.

For Madea to play like the original, hysterical creation she is—more than just an actor traipsing around in drag and trash talking—there would have to be greater conviction and vibrancy than is evident in Madea Goes to Jail. The formula has become too familiar, there’s too much dead air and the actors seem subdued. Perry’s last movie, The Family That Preys, was a relatively stark affair and suffered because it didn’t feature his signature creation. Here, the character on whose broad back he built his mini entertainment empire is practically incidental—and not nearly offensive enough.