close
A city that calls you 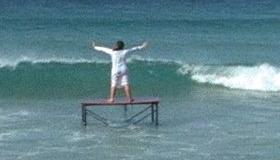 A despot named Pooky once cracked: “That s--- just be callin' me man...I just got to go to it!” The actor was Chris Rock, the film was New Jack City and the “it” was crack cocaine. New York City has its own calling: like crack, the city is lethally addictive. From afar all’s glossy, neat and sweet. Close-up—it’s chaos. Filmmaker Chiara Clemente takes her cine-syringe and draws from five female artist transplants who chose NYC as their playground—two are in blossom while the rest pump out convincing work well into their golden years. Success and XX chromosomes supply the documentary’s quotient. Expect plenty of art fans that had a schedule conflict during the last Whitney Biennial to be granted a solid here, as many of the film’s featured artists’ shows are recapped between abridged testimonials.

The opening montage caps things off with an entrancing feel. Extended gazes at the endless concrete and its stacked edifices mock us. At first, the feeling is too nice. You get these rare, direct looks at Midtown and its Beaux Arts rooftops all whizzing-by in a moving car. It’s not until the editor layers a shot that goes below a tunnel under Grand Central Station, into a subway car and to the outer reaches that we see the city through tagged, acid-etched panes. The first and youngest of the doers on-display is a twenty-something printmaker who goes by the moniker Swoon. As she pedals her fixed gear bicycle through Brooklyn the camera films her deviant antics: she puts up “destructive” wheat paste illustrations on public buildings gorilla style. The street art is massive in scale.

Why New York? Swoon opines the town is “the biggest, loudest and most intense city that we have.” The red-haired art school grad arrived more than a decade ago and recently upgraded studios and garnered acclaim. The street cred landed her first major gig at The Deitch Project in SoHo. Momentum in her favor, she was soon showcasing life-sized woodcuts at MOMA and P.S. 1, plat-forming pieces like a neighborhood jester riding his BMX, a black boy flexing his bicep and a construction worker taking a swig of water from a gallon, all to be enjoyed by elite circles. To stave off becoming “institutionalized” Swoon skips town and hitches a ride on a freight train to play art Olympic games with pals in Minneapolis. In absentia, her work is fetching a pretty penny.

Harlem’s swagger fits that of Egyptian-born needle and thread master Ghada Amer. She landed in the States in 1996 and is drawn to the Big Apple for its heart attack pulse. “Conflict for me is changing all the time,” she says. “This is why I feel very comfortable while I’m here because no one sleeps.” Amer makes erotic tapestries. The film peers in on her process as she draws on 8.5 x 11 inch white paper with a fine-tip pen and then executes the design to dining table length with apprentices sewing away. What makes her tick? “I do art because I don’t want to die.” Revolting against the servant roles of women by furiously threading wicked images of females posing nude, she cuts the conventional strings of man’s master plan. Major galleries come calling, too.

The film sojourns from Gotham for a stint in Egypt as Amer and her ex-diplomat dad roam the streets of Cairo. Mom likes what she sees from afar but a few paces closer and she’s aghast. “I like them when I look at them from a distance. The colors. But I just can’t look at them.” Amer’s father steps in for his daughter and declares, “We are proud of our child.” It’s not long before Amer buys into the American dream with the real-estate purchase of a brownstone. Happily ever after...

The remaining specimens include: flower-child-turned sculptor Kiki Smith, a performance artist from Serbia named Marina Abromovic and activist Nancy Spero. Smith preps for her big show at The Walker Art Center in Minneapolis. In a frenzy, she is sketching, making collages and working her hands into the gray clay for the upcoming retrospective. Her shows a wide range of offerings.

Marina Abromovic premieres a seven-hour work at a little hole in the wall called the Guggenheim Museum. Luckily, the director saw fit to air some of the grittier stuff earlier on in her career, like her masochistic solo show playing a flagellant bruising her naked body, or endless combing while she repeats “An artist must be beautiful.” That beats her more current face dangling, dead bunny bit.

Nancy Spero and artist-hubby Leon Golub came to the wild side of New York after leaving Paris in the Sixties. Golub is no longer alive, but the silver-hailed Spero, whose earlier work provocatively attacked the Vietnam War, is still pushing her art—albeit slower. The impromptu militant whose irreverent and sexually-tinted mushroom cloud images brought war into the art discourse is still in the line of duty. “There are always different battles, always to be fought. You really can’t sit back in the rocking chair.”

The New York described in Our City Dreams is thickly layered in icing. Though, there is a brutality to this town. For the five that are getting to throw their stuff on glorified walls for a few weeks there are 500,000 others that are being chewed-up and spit out. It’s nice to look at the ones that made it and witness their continued efforts to crank out goods. There’s nothing wrong with success. And staying relevant in the modern landscape is no small feat. But there is a gaping cavity in the structure of this film that assumes too much from an audience to believe that these five stories—however heralding—are the norm. Why not put out in the open some of the struggle and rejection? What about the days when the art stars were nobodies?

The filmmaker accomplishes a strong connection with her subjects and trapezes New York’s persona nicely with its 16-millimeter cutaways and fun clips of the turning seasons. The intent is noted. Daring as it may be to pry into the lives of these five accomplished artists in the big city and chat about doing their art free from panicking about the next hot and cot—well, it can’t help seeming like the equivalent of tossing a hook in a soup bowl and posing for pics with a goldfish. True gothamists will salute the promise of the picture but are too savvy to be sold a diluted dose.