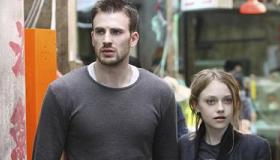 Blame the Nazis. As we've heard through countless Sci-Fi thrillers looking for that extra frisson of historical heft, in 1945 Hitler's scientists began work on honing extra-sensory powers for military might. (Hilariously, decades later, so too did the Americans—read Jon Ronson's The Men Who Stare at Goats for more). In David Bourla's script, the fall out here is the formation of The Division, a government agency who captures and experiments on the psychically gifted. If this sounds like the Halliburton version of X-Men, well, it kinda is—there's no happy, power-learning, training montage, no hugs, no "Hey, everyone! We're in this together!" But there are plenty of explosions and decent effects, both of which will lure a respectable amount of bored teenagers into the mall multiplex.

Like brothers on fraternity row, those with special powers are grouped by name: Watchers, Movers, Pushers, Sniffers, Shadows, Melters, Screamers and Bleeders. (One of those is fake—I'll leave you to guess.) Nick (Chris Evans) is a mover. Not a very good one—he can't even flip over gambling dice—which might explain The Division's odd lack of interest in reining him in for study, but that's more likely just one of the plot holes littering the script. Nick's murdered dad (Joel Gretsch) was a top notch Mover, and inheritability sounds like it makes a difference, but that idea, too, is cast aside like stale popcorn. Enter Dakota Fanning as a second-generation Watcher who wants Nick's help rescuing her mother from The Division's laboratory. Somehow, this involves a showdown in Hong Kong with a girl (Camilla Belle), a suitcase and a vial of top-secret medicine. It's unclear to us, and only moderately clearer to the people in the movie, as Fanning's powers of prescience are limited to rough sketches she imagines and tries to capture through doodles.

The film's neatest conceit is that Watchers, like Fanning and her nemesis Lu Lu, are aware that the future is mutable, though change is hard. Furthermore, they can only see intention—the best way to elude their eyes is to have no idea what you're doing. For most of the film, Evans and Fanning are fated to die, which, in a logical trick, helps keep them alive, since the psychically-empowered Hong Kong mafia and Division baddies like Djimon Hounsou and Neil Jackson see them as innocuous as corpses.

The best way to enjoy the film is to shut off your brain and watch the weird stuff. Director Paul McGuigan appears to have undergone two quests: finding the wildest looking extras in Hong Kong and finding the wildest looking sets. The backdrops are riotous in color and texture, and the humans that mingle around them have some of the most fascinating faces on camera with long noses or crooked cheekbones or eyes that pop out like a frog's. Amidst the chaos, Dakota Fanning is once again one of the few actors in a film who can act—a scene in which she gets drunk for better mental clarity is a gas. Evans and 10,000 BC 's Belle shuffle through a turgid romantic subplot, and though the two characters are very, very pretty, they've got the chemical spark of a banana. Curiously, Evans still hasn't mastered his powers by the climax—his main role isn't fighter, but punching bag. His Pusher versus Pusher fight scenes must have been hilarious to watch be filmed: Two skinny guys waving their arms at each other and screaming at nothing—an apt symbol of the entire film.