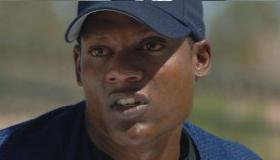 Is there an audience for gentle any more? Probably not, and more's the pity. Because if any "little film" of 2008 deserves to be seen and savored, it's this one.

Sugar is a heartfelt immigration drama masquerading as a baseball movie, and one of the sweetest and most accomplished films to debut at Sundance in 2008. Half-Nelson co-directors Anna Boden and Ryan Fleck take a surprising new direction in this largely Spanish-language film about Miguel Santos (Algenis Perez Soto), a Dominican baseball player with dreams of making it into the big leagues in the U.S.A. The sustained delicacy of Sugar ’s tone and its layered exploration of a unique milieu make this a moving and memorable effort from one of indie cinema’s most promising young filmmaking teams.

Sugar begins in Santos’ Latin American home village, where he’s a local hero and the American-style baseball he plays at a local baseball “school” is the only ticket out of poverty anyone can imagine. Santos is a pitcher whose arm is so good that he’s quickly jumped up into an American minor league club. In the U.S., he’s the ultimate fish-out-of-water—unable to speak the language, alternately overwhelmed by the whir and bang of American cities and lost in the agricultural vastness of the Iowa farm town where he eventually comes to rest. Meanwhile, the American minors are not what he expected. The players are far better than he’s used to and the club atmosphere is Darwinian, with his best friend one of the first to be cut from the squad. The pressure is almost unbearable, with Santos convinced that the smallest mistake may end a decades old dream.

What could have been yet another Rocky -style exercise in athletic affirmation is far more complex and meticulous than that. Sugar is the story of a boyhood dream pursued and found wanting, and how the adjustments that requires of the dreamer make a boy into a man. In this era of global America-bashing, it’s refreshing to see a film that stands firmly on the side of America as a dreamscape of possibility, not just for the supremely gifted immigrant like Santos but for all the world’s “huddled masses yearning to breathe free.”

That doesn’t mean that Sugar is in any way sap-headed or simplistic. There are aspects of this movie, especially in its depiction of the intercontinental baseball farm system, that border on political exposé, with young and illiterate athletes strip-mined from impoverished Latin American villages like mineral deposits and then flippantly discarded at the first sign that the seam of gold is about to exhaust itself. But Sugar ultimately shares its protagonist’s belief that America is the place of unlimited possibility, and in its own quiet way, it puts that message across with passion and power. In a world where too many filmmakers are content to bunt their way onto second base, Sugar swings for the fences, and knocks one out of the park.