close
Not even as funny as the joke that ends “dead ant, dead ant” 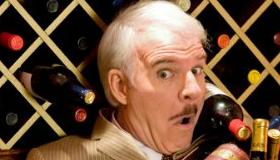 With this sequel to the 2006 release that both reinvented and relaunched the original Blake Edwards film series, Steve Martin officially becomes the first actor since Peter Sellers to earn a second stint in a Pink Panther film. Given the series’ turbulent history of false starts and failed restarts, that’s no small achievement. Unfortunately, the film itself is. Geared primarily to the teens and preteens for whom there is no Inspector Jacques Clouseau, this, the eleventh Panther picture (for those keeping count), is vapid, low-grade slapstick, hopelessly dull yet innocuous, designed more for marketability than entertainment so as to coast comfortably through two middling weekends of respectable pre-Oscar counter programming before word of mouth drops its third weekend drop-off off a cliff.

Having already dispensed with the Sellers comparisons in the previous picture, Martin, who again takes a co-writer credit (this time alongside the screenwriting team of Michael H. Weber and Scott Neustadter) has clearly grown comfortable molding Clouseau to his own particular comedic proclivities, which is to say the kind of slapstick and relentless mugging that he was supposed to have left buried in the ’80s. Indeed, the resurrection of Clouseau has likewise marked the resurrection of an archival Martin that, in the edgier era of Judd Apatow, Adam Sandler and Ben Stiller, feels almost anachronistically juvenile.

The story once again centers on the theft of the Pink Panther diamond—one of several precious artifacts that have been stolen by a legendary thief known simply as The Tornado. Assigned to an international “dream team” of detectives that includes the suave Italian Vicenzo (Andy Garcia), Japanese tech genius Kenji (Yuki Matsuzaki) and pompous Englishman Pepperidge (Alfred Molina), Clouseau initially does little but aggravate his colleagues with his apparent incompetence and clumsy bumbling. Of course, as per usual, bumbling is all part of a sleuthing process whereby, somehow, Clouseau always manages to prevail.

Part of the problem here is that the formula that once worked so well for Edwards and Sellers (but less well for Edwards without Sellers) feels especially uninspired in second-hand hands. The previous film—directed in predictably lackluster fashion by Shawn Night at the Museum Levy—wasn’t much better, but received a certain amount of leeway from critics and audiences willing to give the new Martinized Clouseau the benefit of the doubt. In the hands of Pink Panther 2 director Harald Zwart, the Norwegian-born helmer of both indie gems ( One Night at McCool’s ) and studio duds ( Agent Cody Banks ), the institutionalization of those flaws makes the new picture aggravating at best. With the exception of only one very clever gag—a restaurant scene involving a tumbling wall of wine bottles—there’s nothing here that rises even to the level of a bad Three Stooges short. Martin tries too hard, John Cleese—stepping into the Dreyfus role played previously by Kevin Kline—is painfully miscast, while returning cast members Jean Reno and Emily Mortimer—both exceptionally talented performers when given good material—are frustratingly underused. Indian superstar Aishwarya Rai Bachchan, here appearing in her first major Hollywood studio film, is a luminous presence until she’s actually asked to do something, at which point the picture collapses as badly on her as it does everyone else. Only Garcia and Molina manage to acquit themselves respectably by elevating badly written parts that essentially have nowhere to go but up.

Fans of cameos get a few modest payoffs courtesy of Lily Tomlin, Geoffrey Palmer, Jeremy Irons and French recording star Johnny Hallyday (“Man on the Train”), though even these appearances seem forced and unnecessary.

Unless 12-year-old boys have suddenly developed taste and discernment, however, this should all add up to box office earnings sufficiently respectable to justify a third infliction of the same, which, in keeping up with its developmentally-challenged audience, just may see fit to elevate its comedy several notches to finally include fart jokes.