close
A gentle, unforced fable about the dangers of greed 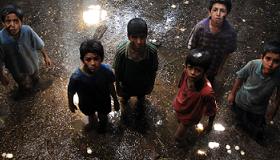 Oscar nominated Iranian director Majid Majidi ( Children of Heaven ) rebounds from the ill-received Weeping Willow with this lovely, metaphoric tale about not letting the things you own, own you. Exploring themes of modernity versus tradition with a soft touch, Majidi creates a tale more resonant then most domestic children’s films and literary works covering the same ground. Frequent Majidi performer Reza Naji is simply wonderful as a poor rural family man who comes into money and, as a result, loses his moral compass. One can envision The Song of Sparrows doing a bit better than average for this kind of deeply foreign fare. Otherwise, it’s off to the DVD shelves where this sweet little film deserves to be discovered.

Working off the simple, sometimes striking, beauty of cinematographer Turaj Mansuri’s imagery, Majidi begins his fable on an Iranian ostrich farm outside Tehran, where Karim (Naji) has just been fired for letting one of the flightless, long-necked birds escape into the hills. Unemployment couldn’t come at a worse time. His oldest daughter Haniyeh’s hearing aid has dropped into a sludge-filled pit outside their home and requires repair. In Tehran to fix the hearing aid, Karim is mistaken for a motorcycle taxi; an unforeseen opportunity he embraces in earnest because his fares pay cash. And lots of it.

Although the story, written by Majidi, deals in strong lines and obvious contrasts worthy of Aesop, Majidi creates such a warm and lyrical flow that moralizing, or any sense of being taught a lesson, is never an issue. Jetting around the dense, ugly city on his motorcycle, Karim sees the corrupting influences of modern life: men bilking him out of his fare, plotting on their cell phones and angrily demanding he find another spot to wait for customers. Soon, Karim is returning to his village with junk he finds in the city and his home becomes a monument to the unnecessary accumulation of useless things. Even his children get into the act. Youngest son Hussein (Hamed Aghazi) has dreams of cleaning out the sludge-filled pit and filling it with fish to be bred and sold. But here, Majidi shows he’s not totally against the notion of money and chattel. He’s just arguing for restraint and always being aware and appreciative of what nature provides. One of the film’s most arresting images shows what happens when Hussein and his youthful pals become too wrapped up in capitalist concerns. Majidi’s solution is a proper and satisfying readjustment of Hussein’s attitudes towards wealth.

Karim’s readjustment is no less satisfying. Ironically, the more he accumulates the less generous he becomes. As one who now equates happiness with material possessions, Karim begins losing touch with nature and nature reacts in kind, as the fields around his village turn brown in response to his corruption. With his graying beard and wizened, hard scrapple face, Naji gives the movie a strong foundation. He’s the only professional actor in the cast, although everyone contributes ably. But the movie soars on Majidi’s vision. Some of the most emotional moments show how simple expressions of affection are the most genuine and meaningful, like Karim tying a bandage around a boy’s finger, or Haniyeh (Shabnam Aklaghi) pretending her hearing aid works, so Karim won’t have to buy a new one. Everything floats on a cloud of unforced symbolism and sweet humor. According to Majidi, traditional values and materialistic concerns don’t have to be mutually exclusive and they don’t have to conflict. Just make sure the right one is driving your actions.