close
A quirky and incisive view of a complex city 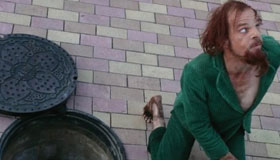 Three talented international directors—two French and one Korean—contribute a short film to this fascinating anthology, unified by the titular setting and the use of surreal, fantasy elements. Michel Gondry ( Eternal Sunshine of the Spotless Mind ), Leos Carax ( The Lovers on the Bridge ) and Bong Joon-Ho ( The Host ) each probe the nature of the Japanese metropolis with idiosyncratic insight and, in the first two cases at least, characteristic verve. The size of the movie’s domestic take, while limited by the foreign-language ceiling, will depend on how vocal cineastes are in championing Tokyo! and whether it strikes a chord with Japan-watchers and Japanese ex-pats.

Gondry’s piece, Interior Design, follows a young couple as they arrive in Tokyo from the provinces and crash in the tiny flat of one of the girl’s friends. The male half of the duo is an aspiring filmmaker and carries with him his first opus, an amateurish sci-fi creature-feature. As they look for an apartment of their own, we realize that she suffers from low self-esteem. He sees everything through a filmmaker’s eyes and their bond is anchored in a shared love of spinning and acting out mini-narratives. He gets a temp job wrapping presents in a store, but she shows little aptitude for anything. They overcome a major mishap involving their car and he premieres his movie in a porno theater. Soon afterward, there’s a surprisingly magical turn of events as her insecurity is manifested physically. As always, Gondry exhibits humane sensitivity and a whimsical sense of humor. Like in his underrated Be Kind Rewind, he’s fixated on the imaginative power of filmmaking and creativity more generally, without being overly serious or pompous. The resolution of this story, which addresses issues of female identity and gender relations, has a satisfyingly bittersweet quality.

Carax’s Merde is the most bizarre and provocative of the three films. In it, a dirty leprechaun-like man emerges from the Tokyo sewers and terrorizes the populace. He saunters along the sidewalk munching flowers (later he devours chrysanthemums, the symbol of the Japanese royal family) and puffing on a cigarette violently bummed from a startled shopper before descending back below ground. TV news reports of the Caucasian "Creature from the Sewers" are the first sign he will become a media celebrity. After finding a stash of WWII-era grenades, he reappears and launches a deadly attack on the citizenry. The story gets even stranger when he’s caught by police and incarcerated. A Parisian attorney who speaks the prisoner’s guttural language and has a similar beard and grotesquely long fingernails travels to Japan to defend him when he stands trial. Carax’s disconcerting allegory is evidently a commentary on Japanese xenophobia and racism, as well as the society’s presumed insularity, yen for capitalism and prizing of cleanliness and order. The vulgar intrusion represented by the filthy gaijin is a disruption that Carax presumably thinks the Japanese need to experience. An example of his darkly wicked sense of humor—and willingness to bash other societies—comes at the end of Merde when we see a faux teaser for a sequel: Adventures of Merde in New York.

Finally, Bong Joon-Ho’s, Shaking Tokyo, links seismic phenomena to the tendency of certain Japanese individuals to wall themselves off from society and become recluses called hikikimori. One such shut-in falls madly in love with a pizza delivery girl who faints inside his apartment during an earthquake. After she recovers and goes on her way he feels compelled to find her. Her boss informs him that she has become a hikikimori herself, which prompts him to consider venturing outside his ivy-covered building for the first time in ten years. Unlike the first two pieces, Shaking Tokyo is somewhat ponderous and predictable in its handling of its theme. The dystopia of isolation it describes seems overly familiar. Lacking the same degree of specificity and development as the Gondry and Carax films, it’s held back by a sense of abstraction.

Taken as a whole, the three parts of Tokyo! provide a challenging picture of contemporary Japan. Any discernible points about the capital city or the architecture of the Japanese psyche (pro or con) should be taken with a grain of salt. That said, the uniformity that is arguably the most salient feature of the culture when approached from afar can surely withstand, and benefit from, disruptive forces. Creative scrutiny such as Tokyo! ought to be welcomed.