close
Love it or hate it, Watchmen is worth seeing 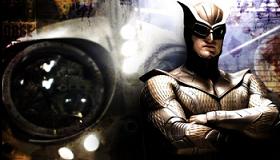 Captain America punched Hitler on a comic book cover. Superman threatened the Fuhrer with a "strictly non-Aryan sock on your jaw." That's as safely political as our spandex heroes get, which is why it's a shock here to see Dr. Manhattan (Billy Crudup) and the Comedian (Jeffrey Dean Morgan, a charmer, here meaty and lethal) lay waste to a field of Viet Cong, incinerating and blasting them one terrified fighter at a time. Audiences will flock to this cynical juggernaut—some to love it, some to try to hate it—and all will leave feeling they've had An Experience.

In Watchmen history, the original gang of superhero vigilantes were World War II celebrities. Silhouette (Apollonia Vanova) strode proudly through the ticker tape parades to grab a cute nurse and bend her backwards with a kiss. But that was the last moment when war was morally black and white; when the Watchmen—and America—got mired down in the fear of the ’50s and the tumult of the ’60s, the country and its saviors suffered. This is a parallel America where after the hippie stuck a daisy in the soldier's rifle, he pulled the trigger. Silhouette and her nurse were murdered in a lesbian hate crime, perky Silk Spectre (Carla Gugino) succumbed to booze and men, and when this movie opens in 1985, the Comedian has just been tossed out of a window by a mysterious blackhooded man.

The next real plot point doesn't happen for an hour. Like Silk Spectre's boozy regrets, this is a story that would rather study the golden past than involve itself in the grim future. After ‘Nam, Comedian and Rorshach (Jackie Earle Haley, fantastic) went rogue, punishing man's wickedness with the wrath of a thousand Travis Bickles, and making superhero vigilantes as unpopular as Batman at the end of The Dark Knight. The next generation of Watchmen has taken off its rubber suits and capes and gone underground in plain sight; they're Clark Kent with the tights packed in storage. Ozymandias (Matthew Goode) is a brilliant billionaire, Nite Owl (Patrick Wilson) has packed on the pounds and the new Silk Spectre (Malin Akerman), daughter of the original, is in a dysfunctional relationship with boyfriend Dr. Manhattan, who, since the accident that made him an atomic god, has increasingly grown distant from humanity, walking through the real world "like mist," she gripes.

Dr. Manhattan's best moments are when he fumbles for the pretense of human emotions. Aware that Silk Spectre suspects he's fallen out of love with her and mankind, he splits himself into three doppelgangers and sends two into her bedroom for a threesome while the last piece of him continues work on his top secret invention. (And he's caught off-guard by her anger.) He's the heartless heart of the Watchmen myth; like his fellow superheroes, humanity is beneath him. Most see people as either slimy or small—even Nite Owl and Silk Spectre, the fluffiest, prettiest pair, can joke about a man's fatal plummet down an elevator shaft like an old college prank. For anyone who ever wondered why Superman insists on saving every person in peril, Alan Moore's bracing original characters and story also ask 'Why bother?'

Inadvertently, director Zack Snyder underscores his point. Snyder can't capture a sentimental human emotion—like Dr. Manhattan, ultimately we, too, don't feel a thing for these humans with their loud talk shows and continued love for President Nixon, here in his fifth term in office. Dr. Manhattan's solution is to teleport to Mars, ‘a place humanity couldn't improve,’ he declares. ‘They'd only soil it with oil pipelines and strip malls,’ he notes. We're mostly stuck on Earth, cringing at Snyder's attempt to form a great romance between Silk Spectre and Nite Owl. Half of the cast can't act and worse, must wrestle with dialogue from David Hayter and Alex Tse's adaptation that proves that lines that look deep in a text box are too flat for film. (Sample exchange: "What happened to the American Dream?" "It came true.")

Snyder is lousy at directing actors, however, he's tremendous at directing action. When even smart directors like Paul Greengrass have succumbed to breakneck editing, Snyder knows the power and awe of patience. In 300, we watched the beautiful cruelty of a spear soaring through the air and into a man's chest, or a hapless Persian somersaulting as his leg is severed from his body. The Comedian's deadly opening sequence is a masterpiece of fight choreography with the two brawlers crumpling furniture as easily as sugar sheets under their strong fists, and when the Comedian is ultimately tossed out of a window, the glass crackles and floats around him like he's in a snow globe.

Snyder doesn't chop; he pans. He's incredibly—but not stupidly—violent. Pineapple Express had obvious heroes, but the body count in that film feels perverse. Those deaths are entertainment. Watchmen goes beyond nameless bullet-riddled victims. A pregnant woman is shot in the belly. Two dogs fight over the leg of a dead six-year-old girl, still clad in a ruffled sock. But Snyder isn't using death for cheap thrills; we're meant to feel revulsion and despair. There are no fun fights. When our semi-protagonists battle in mere self-defense, the loud whiplash snap of each shattered bone makes us uneasy. Even a scene in which the Comedian batters and attempts to rape the original Silk Spectre both flouts and indicts misogyny. Taking in her garter belt and miniskirt, he tells her she dresses like she wants it, and we flush with guilt that it's us readers who've mandated skimpy outfits for all female heroes.

Watchmen is gunning for a scene in which every character—and the audience—is forced to question their own morality in a climax where the "good" choice and the "bad" choice might both result in the deaths of millions. In that moment, we ache for a character we once found loathsome, and find the qualities we thought were just to instead be cold and unsparing. There's been a lot of sour fanboy grumbling about this decade's need to put our superheroes on the therapist's couch. While Watchmen shares a common tone with these reworked comic book psychodramas, its focus is political not personal. It's knowing without being ironic, using music to make wry commentary satirizing its own seriousness, but never once allowing the actors to wink or mug. It won't please everyone, but what it does right outweighs what it does wrong, and if I was Dr. Manhattan, I would calculate its strengths and judge it a success.