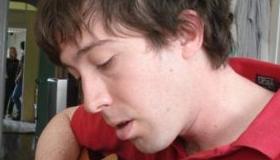 Alexander the Last, from director Joe Swanberg, is an evolution in the mumblecore movement—which is like painting a white stripe on a Ford Pinto and calling it an evolution in automotive design. Still, at least from a production value standpoint, this curious micro-genre had nowhere to go but up. For those who prefer films whose budgets exceed the price of the ticket to see it, here’s a quick primer: mumblecore movies are shot on digital video with microscopic budgets. They star non-pro actors improvising mounds of dialogue about their characters’ post-collegiate problems. Sets are cheap and cramped. The finished product rarely scrapes 80 minutes. They play exclusively to cult crowds. With its filmmaking strictures, proud wallow in twenty-something angst and self-conscious expression of feelings, mumblecore sounds as annoying as Dogme 95. But, like that Lars von Trier co-creation, it can’t be denied that mumblecore has resulted in some good movies (and Dogme 95 co-creator Thomas Vinterberg’s The Celebration is devastating). In Alexander the Last, Swanberg finally gives us a mumblecore production that feels like a tight, emotionally invested movie. He even employs some professional thespians to tell the story of an actress who cheats on her husband with her off-off-Broadway co-star. Some might think this means mumblecore has jumped the shark. Actually, it could mean that mumblecore is growing up. Releasing the film straight to VOD may seem like a defeat. But when genre fans mix with insomniacs and lovers of rather explicit sex, the result should mean better numbers than a theatrical run.

The Alexander in question (Jess Weixler) is an aspiring actress married to Elliot (Justin Rice), a sensitive and nerd-cute musician. When Elliot takes an extended leave to go on tour, Alex is open to the brooding, bowl-cut charms of Jamie (Barlow Jacobs), a Tennessee transplant and co-star of her new play. The challenge for the play’s director (Jane Adams, surely the most recognizable name to appear in a mumblecore film) is to make on-stage intercourse seem authentic to the audience. But Alex’s growing feelings for Jamie are definitely real, even if they sprout from the theater’s artificial environment. To diffuse her growing attraction, Alex tries to pawn Jamie off on her sister Hellen (Amy Seimetz). Each woman’s desire for the handsome interloper leads to the film’s highlight, a nicely realized sequence where Alex’s simulated, on-stage sex with Jamie is intercut with Hellen and Jamie engaging in the real thing.

Despite the potentially florid goings-on, Swanberg ( Hannah Takes the Stairs, Nights and Weekends ) stays true to mumblecore by maintaining a low boil. His actors find meaning in pauses and empty moments, which is one reason why mumblecore movies occasionally hit emotional nerves that studio films can’t. The women make the best impressions. Swanberg trades mumblecore prom queen Greta Gerwig ( Baghead ) for Weixler, who was so terrific in Teeth. With her Alicia Silverstone looks and emotional reservoir, one easily envisions a step-up into more mainstream indie fare (if “mainstream indie” is not an oxymoron). The men, however, are a pretty bland lot. Rice is meant to be bland, or Alex wouldn’t be tempted to stray. And with tousled good looks that auger well for any future career as a jeans model, Jacobs is basically just chum for two attractive emo-sharks. Indeed, with Elliot gone, Alex is easily attracted. But like any relationship (personal or professional) attraction and commitment are crucial partners, interconnected yet awkward. Alex’s young marriage works, we can assume, because a balance between the two is struck. But when Elliot leaves for his tour (and naïvely agrees to let vagabond Jamie crash on their couch), Jamie’s handsomeness, and the forced intimacy he and Alex share on-stage, become a workable, possibly preferable, substitute. Alex’s need to feel both attraction and commitment is tested when Elliot returns. Initially, she is cold, making him negotiate each kiss and sending his calls straight to voice mail. Eventually, she makes her decision and it’s one that elevates the film from a mere story of a cheating spouse to something more. Mumblecore has always lived in small moments, sometimes excruciatingly small, but rarely have these moments added up to a memorable takeaway message. Here, they do. And in Swanberg and Weixler’s sympathetic rendering of Alex, we don’t condemn her for what is, hands down, adultery. In fact, we connect with her confusion and the notion that in a relationship, wants can be met by a thousand different people but needs should be met by only one.