Anvil! The Story of Anvil 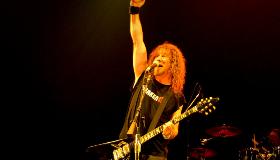 At Sundance 2008, Anvil! The Story of Anvil got compared to This is Spinal Tap, because it’s painfully funny at times and its aging hard rock protagonists are prone to saying things like “I can answer that in three words: We haven’t got good management.” Though there’s a very self-conscious Stonehenge scene and one of the band members is even named Robb Reiner, Sacha Gervasi’s documentary is actually a lot closer to a film like the old Coppola chestnut Tucker: The Man and His Dream, because Gervasi, like Francis Ford before him, cherishes the tenacious and visionary failures among us even more than the successes.

Anvil is a real Canadian heavy metal band, and also one of hard rock’s great also-rans. They preceded the metal resurgence of the mid-80s by a good five years, and their magnum opus, Metal on Metal, helped inspire a lot of the bands that cashed in when power chords and cock-rock re-ascended to the top of the charts. But the boys in this band never made a dime off that achievement, even though they toured the world and were (in the time-honored fashion) big in Japan.

Using a Greek chorus of metal gods, including members of Anthrax and Slash from Guns N’ Roses, Gervasi advances many theories for why success eluded this band. It’s because Anvil are Canadian. It’s because they were on a tiny label. It’s because they peaked too early. If you listen to the Anvil tracks Gervasi incorporates into his film, you could be forgiven for thinking up another reason: maybe it’s because they suck. Even though defining “quality” in pop music is a fool’s game, Anvil’s lyrics bring lunkheadedness to the level of art (but not in that good Ramones kind of way), and lead singer “Lips” Kudlow’s only distinctive vocal idea seems to be to occasionally affect a semi-British enunciation he does not possess in real life, perhaps as a misguided tribute to Ozzy Osbourne.

Gervasi’s affection for this band goes beyond the issue of their quality though, and his film makes the salient point that success makes it easy to stay in the music game, while failure makes it an act of reckless romanticism and sacrifice. Thirty years on, Anvil’s core duo of Kudlow and drummer Reiner are still rocking whenever they can, despite demeaning day jobs, late middle age and family obligations to their wives and children they can only partially fulfill. In a touching twist on the typical music yarn, their small town network of family and friends—the bit players in most rock stories, usually depicted as emissaries of domestic and suburban worlds that are stifling and antagonistic to the rock way of life—make Anvil’s continuing existence possible.

In addition to being an offbeat family drama, Anvil! is also a love story between two men—a pair of Canadian kids who dreamed a dream and then stayed true to it with more fidelity than most rockers devote to their actual marriages. The humiliations this leads to are hilarious and unpredictable, as when “Lips,” who is best known for using a vibrator to play slide guitar, takes a job as a telemarketer and then proves too nice to sell people things he knows they don’t need. Some of what Kudlow and Reiner have to put up with is excruciating though, especially during the protracted scenes of their much-hoped-for European “comeback” tour falling apart around them. When Kudlow reacts to the cancellations, miniscule audiences and rip-offs by telling Reiner to stay upbeat because “things went drastically wrong, but at least there was a tour for it to go wrong on,” you want to reach into the movie and kiss this idiot prince’s hand.

About mid-way through the documentary, Anvil gets booked into an Eastern European Metal festival called “Monsters of Transylvania.” Kudlow wanders around backstage greeting middleweight music stars like Tommy Aldrich of Whitesnake with such awe and delight you half-expect him to drop to the ground and start crying out, “We’re not worthy! We’re not worthy!” like Wayne and Garth. If the rock world honored love of the music half as often as it does things like fashion, marketing and production tricks, Aldrich might be the one on his hands and knees. At the very least, he’d surely be bowing back.