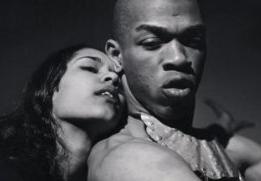 You don’t need abracadabra to make magic. All the splendor and décor that tacks-on zeroes and commas to budgets often amount to squat if a film lacks the Genuine Article. The home-baked Carmen & Geoffrey presents the curriculum vitae and bottomless romance of two talents: the incomparable dancer Carmen de Lavallade and Renaissance Man Geoffrey Holder. Each sprouts from a wholesome genius during formative years and advances toward the new millennium as dare-devilish icons continuing to pliè and relevè into pop culture. Hard to say how lay folks are going to fill seats for this sweet little dance ditty. A more likely fate is a future post on PBS where the picture will thrive as a standalone.

New York in the mid-1950s was a fertile ground of ideas put to work. If it hadn’t been done before you were free to go ahead and take your best shot. As Carmen recalls, in an axiom for life, “If you have desire for it, it doesn’t matter what the world’s doing, you have to do it.” And so she did. A real looker who came from New Orleans, she hopped to Los Angeles on a dance scholarship and later touched down in New York to collaborate with Truman Capote in House of Flowers. The film opens with a nostalgic Manhattan cab ride as Geoffrey recalls seeing the regal Carmen for the first time and describes her bearing a face “to die for.” We cutaway to a performance of Carmen in her prime, strutting with a Pam Grier badass gait on-stage puffing on a long peace pipe and upstaging everybody around her. This foxy lady has the It Factor.

Smitten with the dancing lovely and now co-star in the Capote production was a virile and gregarious Geoffrey who came from Trinidad. Breaking through the traumas of being dyslexic and a dancer in a land rooted in machismo, Geoffrey Holder persevered over many trying to inhibit and discourage. But Geoffrey had a hero. He came up emulating his older brother Boscoe. Footage from one of his early shows bears witness to a roaring lion stepping with attitude in front of a three-man bongo set. Wasn’t long before his unbridled charms caught the curiosity of producers just over the pond.

Nobody says it outright but Geoffrey Holder is a big star far beyond modern dance circles and Tony award wins (for costume design, choreography and directing). While the dance community raves about Carmen’s work, Geoffrey’s been a constant on the big screen and beyond. His heavy, bottomless, bass voice cannot be replicated (think James Earl Jones with a hint of Sean Connery), and he’s been used as a narrator for various major films. Geoffrey played Punjab in Annie and was the flamboyant, lascivious, creative ad director opposite Eddie Murphy in Boomerang where his comical free-flow steals the show. Daddy Warbucks himself couldn’t buy Geoffrey’s talent if he tried to throw his fortune at Stanislavski himself.

At times, the directing duo in Linda Atkinson and Nick Doob sort of leave the ship on autopilot by playing lengthy videos of old dance routines by the couple. Some are collaborations and others are solo acts where Geoffrey either designed the costumes or did everything short of clap for the audience. The constant let’s-go-to-the-tape gets tired. I know that the two were incredible and put on amazing acts (some of the older footage really grabs you), but watching a five-minute analog clip eventually works away at your trust for the filmmakers, and so undermines the point the directors are trying to make. But the filmmakers ultimately do get down to brass tacks. They cover the couple as they continue to create well into their later years. Between sojourns to Paris and his homeland of Trinidad, Geoffrey fields questions from a New Yorker staffer before a large audience. He paints remarkable, fleshy portraits (he’s fond of butts because “they’re so slappable”) and has a New York Times journalist finishing her biography on him.

In an elegant way, the filmmakers let each speak who they are without forcing too many questions: no sit-downs to chat-up the subjects. They just make sure a camera is there so that when some hint of brilliance happens or a witty remark is made, the handheld camera is rolling.

Geoffrey and Carmen are poets who don’t just dabble in the arts. They graced the stage with Josephine Baker and call Tony Bennett a chum. But each walks through life without expecting anything. They earn it again and again. A reserved Carmen is bewildered by the confidence big stars carry. “They are not afraid of who they are. That’s a true star.” And Geoffrey prefers to remain in the periphery and pop out in front of the big lights when he feels fit. He eloquently submits, “I learned that nobody knows your name unless you tell them what your name is.” Beyond his understated way, Geoffrey lives by a sort of magician’s code. He slyly quotes, “When I paint I never show the magic stroke.”

Through it all there is much to applaud and ruminate over once the credits roll. Somehow, you’ve appreciated being granted permission to stroll along with these two jubilant souls who will continue to subscribe to their own rules and conquer their own feats to serve live audiences from all walks. The picture doesn’t carry much drama or rise from any fall. It’s pretty straight and still far from bland. True stardom is not so exact and hegemonized by the gossip shows and tabloid mags and casts who sign hundred-million dollar contracts for Summer doomsday Blockbusters. There are many dancing to their heart’s content and the few that know what’s what are lucky enough to be a part of it.