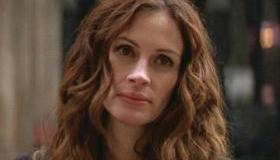 In his follow-up to the Oscar winning Michael Clayton, writer/director Tony Gilroy again trains his sharp eye on corporate behavior, but this time he adds considerable fizz and a jaunty romance between two charismatic, mature leads who recall the days when Hitchcock’s company players included Cary Grant and Grace Kelly. But what should have been (and occasionally is) a jazzy, globetrotting shuffle is overburdened by a viscous plot that requires NASA-grade schematic software to figure out. Granted, Gilroy knows his double agents are springing triple crosses meant to keep audiences on their toes, and that’s fine if not downright refreshing. But its impenetrability gets tiresome, even if watching Clive Owen and Julia Roberts never does. Figure this sophisticated, adult caper will squirrel away nice, if not runaway, numbers for Universal.

With individual nations too busy digging themselves out of the global financial crisis, leave it to giant, shady multi-nationals to declare every shelf of your local supermarket or pharmacy a potential front line in a new, high stakes war zone. Indeed, if Duplicity is to be believed, right now, at this very moment, highly trained, ex-government spies are making sure its corporate competition doesn’t steal the patents for Tucks Medicated Hemorrhoid Pads (although one shudders to think where those patents are hiding). Such is the world of corporate espionage, a delicious hook on which to hang a movie. Gilroy has considered all its angles and worked out a self-consciously busy story that nevertheless overflows with winning moments.

In the terrific slow motion sequence that opens the film (props to DP Robert Elswit and composer James Newton Howard), Gilroy introduces Duplicity 's dueling titans of full-throttle capitalism, Burkett & Randall Zen-master Howard Tully (Tom Wilkinson) and Omnikrom’s excitable gnome Dick Garsik (Paul Giamatti=fun performance). But these warring factions have no weapons, only specially trained spies, many of whom have left the government payroll for the world of corporate intelligence gathering. Two who’ve gone from cold warriors to cold cream warriors are former CIA officer Claire Stenwick (Roberts) and ex-MI6 spook Ray Koval (Owen). They first met five years earlier as government spies at a Dubai consulate party where she seduced him, drugged him and stole precious Egyptian air defense codes. Estranged since then, Ray is now an Omnikrom operative horrified to learn that he’s the contact and she is the drop for a new mission vital to the profitability of Aisle 12 at Rite-Aid. It seems Burkett & Randall has developed a new miracle product and Garsik is desperate to know what it is and how it’s formulated. Since his embarrassment in Dubai, Ray has dreamed of meeting Claire again and confronting her. He’s even practiced his lines, a discipline that becomes crucial to what’s actually going on. Because as it turns out (this may seem like a spoiler, but it’s all so twisty we’re actually doing you a favor), in the intervening five years Ray and Claire have been lovers. In multiple flashbacks, Gilroy takes us through what can only be called relationship espionage, as two professional liars wonder if they’re really in love or if one is gaming the other as they plan a heist against their employers that will bankroll them for life.

It’s sad to knock a big studio film for assuming its audience can keep pace with such intricate goings-on but, well, here we are. It helps that Gilroy’s style is ever so cool and confident and that his leads effortlessly sell the fast-moving plot. Duplicity is Roberts’ first leading lady role since 2003 and it’s good to see her back. With a sly face that always seems to be processing and deciding, she teams well with the usually impenetrable Owen, who lets a little sun shine onto his world-weary personage (although he’s been scrubbed clean and teeth-whitened to the point where he occasionally looks artificial). Their verbal sparring rescues us from checking out of a story that’s easier to digest if you just assume everyone is lying every time they open their mouths.

Yes, Gilroy has a lot on his mind and he puts all of it on paper. By continuing the corporate shenanigans line he established in Michael Clayton, we get that there’s still something sticking in his craw: the war for power in America is waged on a corporate battlefield, not a political one. Power today comes from controlling the amount and type of information consumers receive and how they prioritize it: control that and the money won’t stop. Indeed, Burkett & Randall once bought 7 companies in one afternoon and when coin like that is at stake, tech sweeps and password audits become crucial to protecting and increasing corporate treasure. Ray and Claire understand this, of course, because you can’t beat the system unless you know the system. Claire herself (“a cold, nasty piece of work,” as Ray says) has been undercover at Burkett & Randall for 14 months. And Ray manages to steal Burkett & Randall security codes by posing as a pediatric cardiologist and talking a lonely B&R employee (Carrie Preston, excellent in a tiny part) into the corporate fortress. But unlike Michael Clayton, which always boiled down to our feelings for George Clooney’s character, Duplicity ’s characters get lost in the mishigas. In a film whose currency is lies, this truth will set you free: Duplicity is a double agent, a rollicking romantic comedy too deep undercover as a proudly convoluted caper film.