close
A directorial debut that could have been a knockout 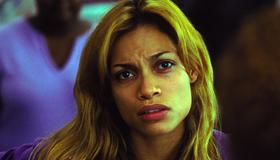 If the MPAA is going to consider smoking when deciding on a film’s rating, they should also note when characters engage in other objectionable activities, like eating fatty foods or watching The Hills. Explicit Ills, the initially promising but ultimately maddening directing debut of actor Mark Webber ( Broken Flowers ) should be knocked for “hoary broadside of red-faced activism.” The story, about the lives of disparate, downtrodden Philadelphians parcels out its agenda in chunks so bite-sized you don’t even know you’re being set-up. But when the protest signs for the “Poor People’s Economic Rights Campaign” appear, so does the realization that Webber has been shuffling around plywood characters just to produce an almost evil-genius piece of stealth activism. Such material might play on the coasts, but that’s not enough. Money will be as scarce to distributor Peace Arch as it is to the movie’s protagonists. What’s most disappointing is that had Webber ordered his priorities properly, Explicit Ills could have emerged as a seriously impressive breakout film on the order of Todd Field’s In the Bedroom or Lance Hammer’s Ballast.

Webber bathes the frame in visuals (well-captured by cinematographer Patrice Lucien Cochet) that don’t spare the naked rot of the American slum. More than merely being introduced, these troubled, striving souls practically ooze up from the crumbling brick of their urban prison. Drug dealer Jacob (Lou Taylor Pucci) pays the bills by selling pot to yuppies like young muralist Michelle (Frankie Shaw) and soon the two are an item. Jill (Naomie Harris) is trying to help her husband Kaleef (Tariq Trotter) open an organic grocery store, while their son Heslin (Ross K. Kim-McManus) struggles to stay on the nutritional straight and narrow so he can fulfill his dream of competing in a weight lifting competition. The heart of the movie rests within Babo (Francisco Burgos), a pre-teen asthmatic who strikes up a friendship (and a random, unconvincing one at that) with chess-loving actor Rocco (Paul Dano). Babo’s mother, who is not given a name, is played by Rosario Dawson, in a brief performance requiring heightened states of emotion. So heightened that when she explodes at a local pharmacist who won’t give Babo the asthma medicine she can’t afford, her indignation at our nation’s health care system becomes interchangeable with Webber’s. And that’s a problem. This demonstrates the difference between saying, “I want to make a movie about interesting characters going through a crisis” and “I want to make a movie that raises awareness of poverty.” One is letting theme emerge through character. The other is teaching you a lesson

It’s a credit to Webber that we don’t just dismiss the whole thing as lefty propaganda. Until the movie starts ramping up to the climactic protest march everyone’s chattering about, Webber gives us an emotionally desaturated view of those living below society’s horizon line. He avoids preaching, is never maudlin and he coaxes understated performances from his actors. He treats the neighborhood like a living, broken ecosystem, with a camera that drifts around like a spy, watching and gathering. Some shots evoke the influence of Spike Lee’s masterpiece, Do the Right Thing, a film that did right that Webber’s does wrong. Explicit Ills is banking on its activism and its belief that viewers will be moved to consider the plight of those less fortunate. It’s a worthy torch to carry and there are those who will feel obligated to like the movie because they like its politics, but no character should receive audience sympathy solely by virtue of being troubled. Webber does, however, speak from strength: he grew up poor and was homeless with his mother for over a year when he was around ten. He knows how such people move (slow and troubled, like walking underwater) around their oppressive environment. He knows what they dream about, mainly escape (sometimes through drug use). It’s a subject that means a great deal to him. But the movie’s denouement is actually the easy way out. Instead of carrying the message home with character and story, it goes for a wild knockout punch that ruins what came before. The medicine goes down easier when you can’t taste it.