close
Bending the fine lines between art, celebrity and self-involvement 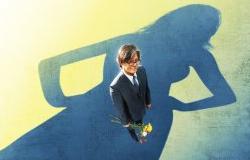 Another tediously reflexive, stitched-together doc dribbles in from the festival circuit? Not so fast. Consisting of footage culled from public access television programs, personal video diaries, and original interviews, Paul Hasegawa-Overacker’s chronicle of his relationship with publicity-shy artist Cindy Sherman absorbs, thanks to his beguiling personality and irreverent attitude toward the art world. It also offers the chance to acquaint yourself with Sherman’s work and her role in the art scene over the last three decades. With so many interlocking bubbles having burst in recent years, the niche picture is unlikely to expand however.

“Masturbatory” is how Julian Schnabel describes the New York-based public access TV show “GalleryBeat” that Paul H-O and Walter Robinson started in 1993. Without commenting on the high wank factor in much contemporary art and hence the hypocrisy of Schnabel’s charge, the surprising thing about this personal documentary is that it’s not more masturbatory. True, Guest of Cindy Sherman is self-involved and confessional, but H-O doesn’t let it all hang out. It doesn’t become a case of “too much information” and he never invades her privacy or gives away intimacies. That doesn’t automatically save it from the trivial trash-bin. Yet oddly enough, this therapeutic exercise in which a gadfly recycles his personal and professional past can be valued for its objectivity.

H-O and Robinson’s guerilla approach was largely debunking in nature (Robinson calls them to the Beavis & Butthead of the art world) and it was while doing the show in 1998 that Paul met reclusive artist Sherman. A romance developed during flirtatious interviews taped while she prepared for an exhibition. Cindy was obviously smitten and many were shocked she had agreed to give anyone so much access. Paul moved in with her in 2001. She nursed him through a lingering illness and they met their respective families. An avid surfer originally from Northern California, Paul taught Cindy how to ride the waves. For him, the relationship began to fray when he started being shunted aside at the glamorous events they attended, and which Sherman apparently enjoyed. He chafed at playing the role of artist’s catamite.

Seeing her photographs and getting a glimpse of her creative process is a treat. Minimal insight into Sherman’s work is found in interviews co-director Tom Donahue conducts with a swathe of artists, collectors, and critics—a set that includes artist Robert Longo, billionaire Eli Broad, actor/writer Eric Bogosian, filmmaker John Waters and actors Danny De Vito and Molly Ringwald. (In the movie’s silliest stretch, Ringwald’s husband and Elton John’s partner David Furnish talk about how they suffered from “Famous Girlfriend Syndrome.”) Friends of Paul and Cindy offer a few observations about their relationship but are mostly reticent. Again, discretion is what makes this film credible. Despite his knucklehead persona, Paul is never flippant about Sherman and rarely condemns or adopts too judgmental a tone about the art he encounters. He refrains from drawing any grandiose conclusions about his experience. At the same time, he manages to cut through the B.S. and pierce illusions about the art scene.

Cinephiles seeking an entry point will appreciate the Goethe quote that appears on screen at the beginning of the movie. “Thinking is more interesting than knowing but less interesting than looking.” There are hidden depths to Paul H-O and unexpected profundity in his perspective. Poseurs and frauds beware: If Paul H-O points a camera in your direction, he may see right through you and your work.