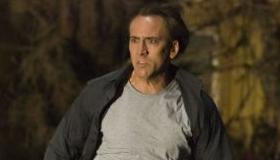 A strange blend of apocalypse fantasy and Christian uplift, Alex Proyas’ follow up to I, Robot is every bit as beautiful as we’d expect, though not quite as tasteful. The story of a cosmologist whose son discovers a prophetic list of numbers in a time capsule, Knowing reads like a reverse Close Encounters ; with eerily aware children and angelic figures (both frightening and friendly) bathed in white light. Comparisons to the novel and TV movie Left Behind are also predictable. As the film both bridges action and sci-fi and offers a moral about union with a great power, it should play well in the bible belt. But, even with the visionary imagery, the drop off in week two will be noticeable.

John (Nicolas Cage) is a single father living in a palatial New England home that, because of the untimely death of his wife, is a perpetual fixer-upper. Though not an effusive father, he lives for his son Caleb (Chandler Canterbury) who misses his mother and resents his father’s rejection of the notion of heaven (do you see the Christian uplift yet?). When Caleb’s elementary school ceremonially exhumes a time capsule buried in 1959, Caleb receives a mysterious but crucial list of numbers and the film unspools like roughly carved genre fare—predictions of this one’s end aren’t hard to forecast.

While certain scenes are tiresomely pat (see: the flimsy montage of John’s half-drunken and fully-obsessive disaster research) others are staggering in their clarity and vision (see the breathtaking YouTube inspired plane crash, complete with awkward zoom in and zoom out of the descending plane). With The Crow and Dark City, Proyas developed a reputation as a kind of Goth Emperor: his imaginings of dark universes were austere enough to have weight and necessary enough to evade derision. Following that, he demonstrated a lot of imagination directing action in I, Robot. Here, there’s an odd hybrid of skill at play. At once he’s mingling Watchmen precise production design (the “descent of the sun” scene is glorious) with conventional dialogue and character development that weighs down what could have been a breathtakingly terse rapture tale. One can’t help feeing an opportunity was missed.

In the beginning of the film, Caleb asks John about the possibility of life on other planets—this leans on John’s faith in science and the certitude of numbers. They estimate that, given the number of stars (a.k.a. suns) in the sky, earth-like situations are possible for something like 10 million planets and probable for more like four million. In my mind, this translates to a whole lot of space for E.T., but, by way of some fairly universal imagery, Proyas translates this to a lot of room for new, Christian-looking start-ups—I mean, for those who don’t get left behind.