close
So these monsters and this alien walk into a bar … and the outcome is just as predictable as you'd expect. 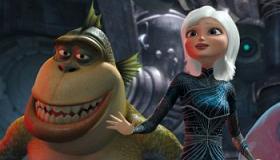 DreamWorks has staked a lot on writer-directors Conrad Vernon and Rob Letterman's 3D cartoon—too bad they didn't invest much in the script, which never fails to hit the most obvious comic notes. (At least the 8-year-olds in the audience were rolling.) Pic could recoup most of its costs with heavy marketing and technological novelties, but by the DVD release—and definitely by next year—audiences will demand more effort than everyone at DreamWorks (excluding the animators) seems willing to exert.

Reese Witherspoon voices Susan, a.k.a. Ginormica, a mealy bride with Witherspoon's button nose and none of her spark. On her wedding day to grasping small time news anchor Derek (Paul Rudd), Susan is hit by a meteorite with a powerful element that turns her hair white and her dress size to a XL40. Within minutes, she's nabbed by a government goon squad and taken to a secret facility that overseer Gen W.R. Monger (Kiefer Sutherland) describes as an "X-File wrapped in a cover up, deep fried in a paranoid conspiracy." Her fellow inmates, Dr. Cockroach PhD (Hugh Laurie), B.O.B. (Seth Rogan) and The Missing Link (Will Arnett), attempt to comfort her in her new life behind bars, as does a massive, furry larva that chirps like Chewbacca and possibly exists just to exact revenge on Pixar for adorablizing a cochroach. Meanwhile, the evil alien Gallaxhar (Rainn Wilson)—a beast with four-eyes, squid legs and hands on the end of each leg—is on an intergalactic hunt for the element packed into Susan's cell matter.

What happens next? Do you really need to ask? Lampooning B movies is tricky business—they're funny enough played straight. Tim Burton's subversive Mars Attacks knew the American Dream was its real target, but Vernon and Letterman stay strictly pop culture superficial. They'll do anything for a laugh (or even a slight smile) including wedging a Dance Dance Revolution gag into the climactic battle; the film's commitment to its premise is about as sincere as Anna Nicole Smith's marriage to her billionaire. (And its references as dated as my lame analogy.)

Still, though the film runs itself into a wall, attention must be paid to the well-cast voice actors. Witherspoon, regrettably, has little to do but squeal—her Susan is written whiny and average, a small personality who would admit she's more likely to be found working to serve up an Orange Julius than to save the planet. When she finally finds her inner badass we're thrilled along with her, especially if it means she'll stop saying her fiancé’s name every third word. Her cohorts, Laurie and Arnett, do solid work with the lines they've got, as does Sutherland's gruff military man and Wilson's slithering villain, but the star here is Rogen, cast concurrent with type as a lovable dolt with motives as clear as his gelatinous body. A genetically engineered tomato crossed with ranch flavoring, he's got no brain, but no matter—his ladylove is a Jell-O salad. Rogen is the best thing in the flick—he's even the best-looking thing. The closest this movie gets to transcendence is letting light and reflection splay across his shiny skin, all in mesmerizing, rippling 3D. By contrast, a close up of General Monger's cheek, ravaged by pores and stubble, left me in awe of the capacities of the DreamWorks' animators. The action sequences aren't shabby either, but the delight is in the details: the way specks of dust fly up when Ginormica thuds to the ground. If they can fix their females—all of whom sag in the middle like pencils with birthing hips—and, you know, write an actual movie, DreamWorks' team could pack a punch more powerful than a dozen atomic avengers.