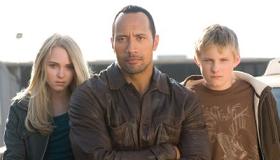 Disney’s second remake of its popular 1975 hit Escape to Witch Mountain (the first being a 1995 telefilm) gets both a 21st century facelift and a slight name change, decisions intended to simultaneously evoke the original while hopefully forestalling expectations that this will in any way be a straight retelling. In popular vernacular, that’s called “trying to have it both ways,” and the effort ultimately falters as a result. Kids with no connection to the original probably won’t care, but adults looking to recapture the magic of their childhood will find this patched-up pastiche sorely lacking and painfully dull, guaranteeing Disney a short but short-lived box office burst primarily from pre-tweeners and their reluctant parents.

At the time Disney first chose to adapt Alexander Key’s 1968 book, contemporary science fiction currents were largely defined by author/researcher Erich von Däniken’s controversial Chariots of the Gods —also published in 1968 and turned into a movie in 1970—which pushed a variety of hypotheses regarding an ancient contact with aliens and the possibility that they had left their seed on earth. By ensconcing these ideas in a family-friendly mystery-adventure, Disney delivered a minor classic with Escape to Witch Mountain, in which a pair of telekinetic orphans (Ike Eisenmann and Kim Richards) head out in search of their origins, all the while pursued by a standard-issue Disney-style adult baddy (Ray Milland) as the deliciously named Aristotle Bolt.

The film’s longevity, however, was all but obliterated when, just two short years later, the entire cinematic science fiction landscape was reshaped by the one-two punch of Star Wars and Close Encounters, setting the stage for everything from E.T., Cocoon and Starman, to Independence Day, Alien and Predator. Wisely recognizing that the intervening years have made the original premise problematically anachronistic (already a factor in the failure of the 1978 sequel Return to Witch Mountain ), the makers of Race to Witch Mountain have instead fashioned a film more akin to the aforementioned classics of the ’80s, a straightforward action/chase picture in which the children (AnnaSophia Robb of Bridge to Terabithia and Alexander Ludwig) are no longer mysterious orphans but straight-up aliens, recently arrived in a flying saucer and on a breakneck deadline to find a hidden device crucial to saving both their world and Earth. On their tail is a tenacious team of government goons led by a ruthless scientist named Burke (Ciarán Hinds), and a Predator-like Alien assassin programmed to blow up anything that so much as smells like his prey. Helping the kids is an ex-demolition derby driver-turned-cabbie named Jack Bruno (Dwayne Johnson) and a UFO-obsessed ex-professor named Alex Friedman (Carla Gugino).

Unfortunately, there’s simply no way to take something that was once fresh and transform it into a referential collage of all that followed without caving to every imaginable genre cliché in the Hollywood playbook. That doesn’t make Race to Witch Mountain a complete yawner—there are enough explosions and relatively well-edited chase sequences to keep even cynics awake—but neither will it do much to bolster the film’s much-needed word of mouth. Director Andy Fickman ( The Game Plan ), working from a script by Matt Lopez and Mark Bomback, mostly plays it safe, taking no great risks while also avoiding major missteps. As in The Game Plan, he’s able to extract a face-saving performance from Johnson, who, along with Robb and Gugino, manifests an almost magical ability to deliver ham-fisted dialogue without looking a complete fool, but it’s never enough to carry the film beyond its clunky, derivative underpinnings. By mid-point, the checklist of near-misses, happenstance meetings, daring escapes and superfluous expository explanations starts to evoke bits and pieces of so many other, better movies that it’s all but impossible to remain emotionally engaged.

There are few trinkets for fans of the original—both Richards and Eisenmann (who now goes by Iake Eissinmann) show up for cameos, while a pair of generals sport names like “E. Albert” (a reference to Escape From Witch Mountain costar Eddie Albert) and “V. Lewton” (a reference to one of Fickman’s idols, famed B-movie producer Val Lewton). Tokens to be sure, but tokens that, despite the lackluster result, could help soften what might otherwise have been a very rough box office landing.