close
A panacea for the spiritually bankrupt 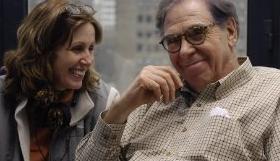 The only thing self-pity is good for is generating laughs. And since the middle-aged whiners populating Alan Hruska’s Reunion go in for so much of it, it’s a shame the movie isn’t more humorous. Turgid is a bit harsh. Too ponderous by half might do. The fault doesn’t lie with the recognizable if mostly anonymous actors who ably portray a pack of baby boomers convening twenty-three years after their graduation from Yale. Writer/director Hruska gives it the old college try, but the best that can be said about his florid variation on The Big Chill is that it will evoke sighs of relief from the patrons who don’t recognize themselves up on the screen. Receipts at New York’s Quad Theater are likely to mimic the plummeting values of their 401ks.

To be fair, feeling sorry for yourself is more unattractive and immobilizing than reprehensible. We all do it. Problem is, these Ivy League elites don’t have much to complain about. Smart, well-heeled and well-coiffed, they met as members of an undergraduate “secret society” and their intellectual and romantic lives were forever entwined. Jake Burns (Brett Cullen) invites them for a two-day summit in the conference room of his Manhattan law firm. It’s been ten years since his wife and fellow member Janie (think the excised Kevin Costner role in The Big Chill ) died and they were last together at her funeral. Evidently, she slept with every one of them, gender notwithstanding, and they all adored her. In a cryptic letter written during her illness, she indicated there was something they needed to know and the prospect of learning what it was brings seven of the group together. Significant others are allowed to sit in on the hopefully therapeutic proceedings.

There’s a billionaire businessman (David Thornton) who has his famous actress girlfriend in tow; an underachieving ex-jock (Jamey Sheridan) and his author spouse (Cynthia Stevenson); a happily married, ethnocentric, Jewish physician from Chicago (Josh Pais); a Hollywood agent (Amy Pietz); and an acerbic, womanizing journalist (Christopher McDonald). According to “the program” their meetings historically follow. On day one each member brings the group up-to-date on their lives, while offering a self-assessment. On day two they level constructive criticism at one another. (Those hoping for a lurid expose akin to the debauched glimpses of Yale’s notorious “Skull and Bones” in Oliver Stone’s W. will be disappointed.) These unhappy souls (most of whom look too old to have graduated in the mid-1980s, by the way) just wallow in their guilt, bitterness, and regret—and yet don’t seem especially anxious to relive their salad days, when they were footloose and bursting with promise. The complicated romance between host Jake and his much-younger secretary (Zoe McLellan) dominates the talky plot.

Not that you could reasonably expect tons of action. The name of the distributor, Talking Pictures Company LLC, sums up this gabfest. To Hruska’s credit, Reunion isn’t as static as it could have been thanks to handsome insert shots of Manhattan, yet also due to his reluctance to stick with any character besides Jake long enough for the audience to invest in their situation. Two building security guards are extraneous to the story, but at least they provide one of the movie’s genuinely light and funny moments. Hruska, a Yale graduate and member of a real secret society, often strains to demonstrate the erudition of his characters. There’s talk of Faustian deals and one character even uses the verb reune. “A weekend like this is so measuring,” observes another, winning the medal for obviousness.

Back when his idealism was un-bruised by reality, the litmus test for the self-proclaimed altruistic Chicago doctor was whether or not he was “ultimately concerned;” meaning “ultimately concerned” in a religious or moral (“for the greater good”) sense. Other society members speak of their collective “obsession with mattering.” That sense of self-importance weighs down Reunion. The characters’ narcissism spills over into the audience and rather than sympathize or empathize, your instinct is to protect yourself from them and their mid-life crises.