close
Defying deconstruction, one violent assault at a time 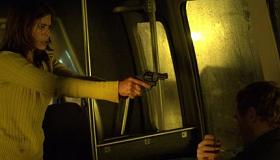 In Shuttle, an airport shuttle drags two girls, two guys and a fence-sitting “family man” around all the eerily isolated industrial areas of Boston. It twists and turns far more inventively than you’d expect it to and ultimately takes you just past the brink of comfort and into shock multiple times. With technical credits at a respectable caliber, this title could do quite well if given a wide release, but as a limited indie release, it’ll likely make most of its money on DVD.

Two friends return from a girl’s weekend in Mexico to find themselves trapped in a shuttlefrom hell! Yes, the premise is pat. Yes, you get what you expect. Yes, this is a film (with a title) that oddly defies deconstruction. But it’s so rare that a run-of-the-mill suspense thriller delivers with such reliably effective execution, it’s almost worth seeing just for the sheer craftsmanship. Surely Shuttle plays the game “by-the-book,” and so isn’t going to be winning any awards for its ingenuity, but for strict genre fare, this one is as effective as it gets.

Jules (Cameron Goodman) and Mel (Peyton List) hit Mexico for what Jules thinks is Mel’s last crazy weekend before marriage. Unbeknownst to Jules, Mel’s broken off her engagement under suspicions her fiancé was unfaithful. Instantly off the plane, young men (on the prowl) approach the girls, and Mel’s luggage gets lost in the shuffle. It’s 2am, pouring rain and the girls hail the wrong shuttle. The boys lose all sense of self-preservation and, to sit with the girls, they ditch their rides to enter the same wrong shuttle. Less than surefooted, the driver (Tony Curran, also the Driver in Midnight Meat Train ), gets them lost, pops a tire and requires the stronger of the two boys (Matt, played by Dave Power) to help him with it. The injury that ensues incapacitates one of the people on the shuttle and may result in a rise in AAA stock. What follows is a swift descent into bloody hostage drama.

Throughout the majority of Shuttle, the agenda and identity of the baddies is obscured and this adds an edgy chaos to the proceedings. Of course the victims are constantly asking “Why? Why? Why are you doing this?” to the point you hope they wise up and at least word their pleas differently. (Yes, I realize one’s not at his/her most creative when facing deathbut this is a movie! A little innovation, please?) Performances are solid, particularly those of the defiant Jules and the wily Mel. Curran’s driver alternates between callousness and remorse, but he never mixes the two to an evocative degree. TV’s Cullen Douglas plays his fence-sitting family man like he’s aiming to match Mira Sorvino’s Mighty Aphrodite. That’s not happening, but nothing much suffers for it. In sum, the film’s solid, effective and perfect for date night.