close
Now crime, that’s something we can throw ourselves into 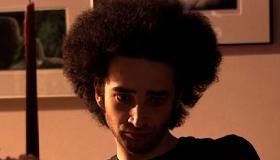 If twentysomethings could script their quarter life crisis (if one exists), it might play out in similar fashion to Skills Like This. This tightly sequenced feature shot in the Rocky Mountains throws several testosterone-charged screwballs into unflinching twists and burning brake U-turns. At its roots, the action-spliced commentary takes on the exhausting day-to-day grind and its headache-inducing same old, same old. Here, the characters walk the big talk and tripwire the hedonistic. Ticket stub potential could be deep because few offerings in the can manage to allow armed rogues to mock the system and somehow get away scot-free by tagging a happy face on the white flag in the end. Advertising targeting youth and highlighting the ribald tacks of the film’s characters could attract attention to the film’s demographic.

Self-proclaimed failure Max is a scribe fittingly played by the picture’s screenwriter Spencer Berger. Distinctly sporting an afro and 5 o’clock shadow, Max stands with a gaunt look as his play crashes and burns. What’s more, while the stage is filled with an ensemble of oddities including two Asian kids in lederhosen, an astronaut lassoed to a ladder, a homely-looking woman cradling a duck and some man in aviator getup channeling Hamlet whilst avoiding a pelting of whole onions—Max’s grandfather goes into cardiac arrest.

Weeks later the freefall continues. Max’s blue convertible jalopy (on-loan, it would seem, from Reggie Hammond in 48 Hours ) gets booted and the down-in-the-dumps playwright pleas to his loony pals, hopelessly genius Tommy (Brian D. Phelan) and straight-arrow-gone-mad Dave (Gabriel Tigerman) at their cantina, that he is kaput. “I’m finished. I’m not writing anymore.” While munching on chips and guacamole, Max’s confidants try to restore his pluck and, incidentally, make a hypothetical joke to go all gangster and steal a souped-up bicycle celestially named Gloria. Somehow, Max translates this ruse as a calling to literally knock off the bank across the street. He grabs a pair of aviator sunglasses and a skullcap and shakes it down. After pulling the guard’s gun from his holster, Max points it at his head (how else do you earn the moniker “Suicidal Bandit?”) and falls in love at first sight with the teller who bags his bundles of cash.

Returning to the cantina reinvigorated by the take, Max manages to ensnare Tommy and Dave as accomplices by telling them about his score and they make a mad dash to avoid the sirens. Huddled at Dave’s apartment, the cool-headed Max explains the rush to withdraw the bag of money and get away with it. The heist incites Dave’s disdain for his corporate existence and pushes Tommy over the edge to live out his fantasies of going on the run as a fugitive. While logic would dictate a low-key lifestyle until the bank thing blows over, the trio and Dave’s turned-on girlfriend go out on the town and swig home-brewed tequila. Where would we be without the foxy bank teller named Lucy (Kerry Knuppe) reappearing for the second act? Soon enough she’s swept-up by Max and his clique of first-time felons. Instead of following through by calling the cops on her hunk of a bank robber, she decides to go to bed with him.

The film jumps the rails from there. Further, the subtleties in its script are abundant and delicious. The thievery escalates and soon enough Max diversifies from wanted bank robber to seasoned grand larcenist. He pulls a statue from the local Italian eatery, rips off the bodega, makes off with big stuffed animals from a toy store. He’s corrupted. “The more I do it the better it feels,” he tells Lucy. She wants him to quit. It’s your usual first-time fight kind of stuff—the new guy’s great but he’s a kleptomaniac. She’s pretty and loose but doesn’t approve of his habitual crime sprees. What to do? Meantime, Tommy is out on the prowl to get a job. His CV is a mixed bag of part-time and temp work without much of a title. Each job he strings along Dave who, for the day, hung-up his coat and tie in honor of a personal day. Tommy’s dressed-up and tries for a job as a substitute teacher but blows it by catcalling a fourth grader on the playground. When he interviews for a Carney gig he can’t get past detailing the carnage he anticipates cleaning-up should a tot fall from the Ferris wheel. He comes close to clinching a paralegal gig by using his gift of gab. But that effort takes a dive, too.

The masterful technique of subplotting the friends’ own thirst for rebellion balances out Max’s brushes with the law. Everybody is craving to alter his or her predictable plot. Lucy wants to snap photos, Dave wants to quit the job where the boss calls him by the wrong name, Tommy tries to be a villain to escape doing anything. However many unfinished tattoos they get or trouble they get into, it all points to an insatiable draw to do something that is dangerous and wrong in order to land some semblance of catharsis. But as luck would have it, Max learns that he has a knack to steal pretty much anything but can’t steal Lucy’s heart. For this, only the good left in him can triumph.

The failed writer thread has been tried before and is a little tired. But the effort here is to witness self-pity and enter a frenzy of it until everybody, the characters and audience together, peak. The writing for the most part is economically witty, the sharp casting and the cinematography is spot-on, with its slick speeding stock and quick edits during the stick-ups and getaways. And the performances by the actors, especially Dave (Tigerman) who is fighting with his own conformity while holding on tooth and nail to his youth by taking risks, plays out nicely. You get lost in the outrageous brain behind the script. Yes, there are cheesy moments and a few too many guitar-laced tracks blaring that I could have done without, but the picture does so much with so little and pulls off a breezy tale of disgruntled adulthood spiraling out of control. We can all take refuge in knowing that, however fast we mature, there is always room to play in fiction’s sandbox.