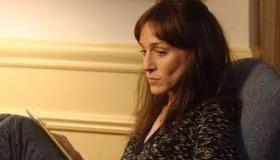 A hate crime at a Vermont liberal arts college leads to venting and little else in this well-intentioned picture based on Rebecca Gilman’s stage play. All that separates Spinning Into Butter from a movie-of-the-week is cursing, as issues surrounding race relations are given a bit of tang but no clarity. While that may reflect reality, it doesn’t suffice when it comes to entertainment or understanding. Headliner Sarah Jessica Parker’s involvement will attract attention when the drama opens in three cities, including the nation’s capital. Subsequent business will be limited to affinity groups seeking a conversation starter.

In a speech delivered near the end of the movie, Beau Bridges’ corduroyed prof explains the origin of the title while recounting the “Little Black Sambo” story. At the outset, a hooded figure watches a cartoon version of the tale before entering a dorm on the picturesque Belmont College campus and pinning an incendiary note on the door of a shy African-American student (Paul James). As Dean of Students, Sarah Daniels (Parker) is the front-line administrator and her reaction appears quite reasonable, unlike that of her immediate superior (Miranda Richardson) and the school president (James Rebhorn), who scramble to minimize the PR fallout and placate the community with a fatuous Race Forum. A local television reporter, Aaron Carmichael (Mykelti Williamson), gets wind of the incident and starts doing his job, which comes to entail cozying up to Dean Daniels.

The folks toiling in academe get the big bucks (kidding) for handling crises like this and it’s not an enviable part of their jobs. Gilman and Doug Atchison’s script takes dead aim at political correctness and the swipes at the diversity piñata taken up by those in higher education. White liberal guilt and the patronizing responses it can produce are tsk’ed at. (So too is a class entitled “The Films of Bridget Bardot.”) Belmont’s students don’t come off well either, including the hypersensitive but righteous undergrads of color; and aspersions are cast on the state of Vermont that aren’t necessarily germane let alone accurate.

Still, it’s the condescending attitude and incompetence of those in power that receives the brunt of the criticism. When the crimes continue—escalating to “N”-word graffiti and the appearance of a noose—campus decorum is lost. Richardson’s shrill character thinks a “ten-point bulleted list” will go a long way toward solving Belmont’s race problems. Sarah and her reporter friend know differently. Each of their last jobs was in Chicago and she’s carrying around secret baggage, hinted at in nightmarish (and lame) flashbacks to her stint as Dean of Students at a predominantly black college there.

Romance is wisely averted, yet the heart of the movie is the deep conversations the pair has, discussions that approach race on a number of different levels. The dialogue has honesty to recommend it, and Sarah’s revelations about what happened to her in Chicago are particularly frank. Nevertheless, the illuminating moments are obscured by some rather sophomoric exchanges that probably sounded better on stage. For example, Aaron says, “You ought to hide those buttons so they don’t get pushed.” Sarah responds, “You ought to hide those chains so they don’t get yanked.” It’s a troubling, exasperating situation and there’s no easy way out for either the characters or the filmmakers.

Regarding the plot’s resolution, the identity of the party responsible for the hate crimes is foreseeable and dispiriting. Overall, the force of Spinning Into Butter is weakened by its high degree of sarcasm and irony, which pushes the disorientation theme too far. In his first feature film, stage director Mark Brokaw moves his seasoned cast through their paces without much fuss, good or bad. As for technical credits, the production team deserves kudos for making New York area locales (Governor’s Island, Drew University and Brooklyn College) stand-in so convincingly for northern Vermont.

Credit goes to playwright Gilman and company for addressing an ugly situation head on. Unfortunately, it’s a scenario that lends itself to hot air and that’s what the movie blows. To switch metaphors, one can assume racism is a festering boil that must be lanced regularly—knowing the discharge won’t be pretty or fragrant. But that procedure can result in more salubrious material than Spinning Into Butter.