close
You would be better off watching somebody play the video game. 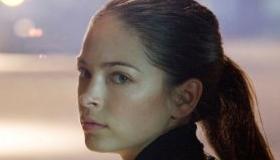 Failing to do justice to its videogame origins, Street Fighter: The Legend of Chun-Li could alternately and without approbation be called Slumbabe Warrior after the titular heroine who mingles with the poorest of Bangkok’s poor before standing up to a villain from those same mean streets. Devoid of a single redeeming feature, the motley flick is a hodge-podge of chop-socky clichés—a ball of flaming, stinky martial arts chi. Few gamers are likely to go gaga over the fourth-rate effort; it makes the dulcet warbling and three-dimensional peach fuzz of the Jonas Brothers seem downright appetizing.

Much could be forgiven if there was any inkling the filmmakers had a plan or were trying to be arch or marginally satiric. A ragged, catchall plot and canned dialogue are minor impediments when the action and visuals are solid. That’s not the case here. For a big studio release, the tech credits are sub-par. Everything’s either muddled or unexceptional. Director Andrzej Bartkowiak, a former cinematographer, has chosen washed-out film stock and a generally bleached look, and the fight choreography and action scenes are ordinary. The only sequence that exhibits a modicum of flair has Chun-Li doing battle in a nightclub lavatory and then using a stripper’s pole to her advantage.

Kristin Kreuk never looks comfortable as the mixed-race beauty whose businessman father is abducted when she was a little girl. Naturally, he taught Chun-Li how to fight and passed on tidbits of wisdom that she clings to while growing up rich in Hong Kong. After attending Julliard, she becomes a concert pianist—a career path she abandons upon receiving a mysterious scroll one night following a performance. It leads her to Bangkok where, as she explains in voice-over, she “loses herself to the pulse of the streets.”

Poverty and injustice are rampant thanks in large measure to the dastardly Bison (Neal McDonough), who has taken control of a powerful crime syndicate and is buying up slums and evicting their denizens. One of his former associates, Gen (Robin Shou), has reformed himself and established the Order of the Web to combat such evildoing. He recruits Chun-Li, becoming her second teacher and schooling her in the ways of a kung fu master, which apparently consist of being able to draw the yin and yang in a sand pit with your feet.

McDonough bites down hard on his role, not bothering to be consistent with his Irish accent. This vocal trait is sort of explained by his back story, which builds via flashback to a ludicrous scene set in a mystical cave and involving his pregnant wife’s belly button and the transfer of his conscience to the next generation. Michael Clarke Duncan plays Bison’s chief sidekick, though the blue-eyed boss also has a lethal lesbian (Josie Ho) and a scissor-handed assassin (Taboo of The Black Eyed Peas) at his disposal. Portraying Interpol Agent Charlie Nash, Chris Klein wins the Razzy for acting. His mugging performance is beyond awful, but at least he looks like he’s having a bit of fun trying to channel Don Johnson in Asia and leering at one of Bangkok’s hottest cops (Moon Bloodgood).

Buddha knows, there’s nothing else that’s enjoyable about Street Fighter: The Legend of Chun-Li. The 1987 videogame may have been revolutionary and its second iteration may have set standards in 1991, but this unnecessary riff, pegged to the release of another game version, doesn’t even have the decency to go by quickly.