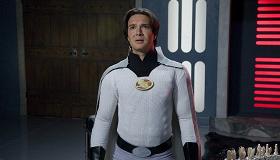 Trying to cash in on the seemingly endless appetite for superhero movies, this lame spoof is about a wanna-be Superman who’s completely devoid of any super powers whatsoever. He joins a team of moronic “heroes in training” with the aim of foiling an evil plot. Looking more like a dopey series episode that might have found its way to Saturday morning TV circa 1970’s, Super Capers is obviously low on both budget and ideas. With a cast whose biggest name is probably 1960’s TV Batman (Adam West in a one-scene cameo) don’t look for this dated takeoff to take off in theatres anytime soon. Currently playing some theatres this amateurish production will be lucky to make it to Blockbuster.

Ed Gruberman (Justin Whalin) is a superhero impersonator who wants to become the “real thing” in order to avenge the deaths of his parents who died in a strange circus accident. After a misguided attempt to stop a mugging, Ed gets involved with an intriguing and “superpowerful” woman named Red (Christine Lakin). Following this, Ed is ordered by a judge (Michael Rooker) to join a team of so-called superheroes in training called The Super Capers. Each one is a comic book stereotype with names like Felicia Freeze (Danielle Harris), Will Powers (Ryan McPartlin), Puffer Boy (played by writer/director Ray Griggs), Herbert Q (Oliver Muirhead), Herman Brainard (Samuel Lloyd) and their leader Sarge (Tommy “Tiny” Lister). Ed enjoys early success with the team in a battle with a couple of villains but the evil doers still escape with a major fortune in gold bullion and leave Ed with a lot of bad P.R. This leads to his false arrest for the gold theft and the end of Super Capers, who get locked in a mansion that eerily resemblances the one from TV’s Dark Winged Vesper (Rooker). Can Ed save the day and solve the crime? You betcha.

There are brief moments of inspiration here and there, particularly with a bit involving a would-be hero named Igniter Boy (Chris Owen) who demonstrates what turns out to be his “one time power” by lighting himself on fire and turning to ashes. Too much of the time though is wasted with moronic shenanigans and B-level acting by a cast that was obviously hired because they were affordable. Whalin plays the lead character, Gruberman, one-dimensionally, while none of the others make much of an impression beyond the obvious mugging and recitation of lame dialogue from Grigg’s witless script.

Over the end credits Griggs professes his deep admiration and gratitude to his favorite filmmakers Steven Spielberg, George Lucas and Peter Jackson but it seems he got his REAL inspiration from long forgotten cheap comic book TV adaptations. At least it’s nice to see Adam West can still find work.