close
On the mixed pleasures of celibacy 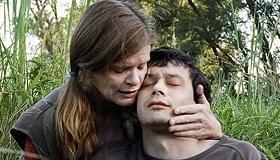 Czech filmmaker Bohdan Sláma sends a Prague educator into the countryside, pins him under a microscope and watches him squirm, albeit tastefully and with every intention of setting him free. A psychosexual rebirth occurs in a pastoral setting strewn with hay and intriguing links between human sexuality and insect behavior. Sláma ultimately opts for workaday melodrama and bovine wisdom. The Country Teacher feels like an experiment conducted outside of time, which could hurt or help its prospects depending on whether arthouse patrons would rather absorb sociological insights into the Czech Republic or enjoy an ode to farm life overlaid with “free-to-be-me-and-you” pedagogy.

Sláma casts frequent collaborator Pavel Liska as his specimen—a study in ascetic masochism referred to as Professor or Peter—who moves to a rural town and takes a position at a middle school. Evidently, he’s running away from something in Prague, where he taught natural sciences at a well-regarded academy. Soon after arriving, he befriends dairy farmer Maria (Zuzana Bydzovská) and her 17-year-old son Lada (Ladislav Sedivý). He’s drawn to their bucolic lifestyle and more.

While it’s refreshing to encounter a screen character that believes in keeping his sexual appetites in check, Peter overdoes it. Determined not to have sex unless he’s in love, he has exiled himself to a place where he believes there will be less temptation and where he can enjoy nature and put the spirit above the flesh. His philosophy has a parallel in the asexual worker bee, whose biological instincts are sublimated chemically and channeled into serving the queen. Science and the vocation of imparting knowledge to his students amount to Peter’s “Queen.”

We learn about his sexual preference when he visits his parents in Prague. (His domineering mother was on the faculty at his old school and his understanding father keeps bees on the balcony of their apartment.) We know he’s sown some oats thanks to a disruptive visit from his boisterous ex-boyfriend. Although he keeps his sexual affinity under wraps for practical and theoretical reasons, there’s also a self-lacerating dimension to his personality. The state of secrecy and repression cannot last, of course. After rebuffing Maria’s advances and then tutoring Lada in preparation for exams (plus counseling him on how to deal with his girlfriend, who visits from the city on the weekends), Peter’s will power fails. He commits an inevitable transgression that, while certainly not a heinous crime, he considers unforgivable. As I see it, his more fundamental mistake is failing to distinguish between love and infatuation.

The cinematography by Divis Marek, who also did the lensing for Sláma’s Wild Bees and Something Like Happiness, has a carefree, playful quality until the story turns hysterical, at which point you can predict what will happen based on the camera movements. His camera slowly circles, panning laterally and tilting vertically, as if being operated by a gently flitting bee or butterfly. This contributes to a meandering pace that matches the rural setting and yet still allows Sláma to create significant tension and a sense of foreboding. The Country Teacher is about self-control and it’s engrossing until control is lost. Sláma’s idealization of Maria as a suffering, maternal figure—particularly when contrasted with Peter’s stereotypically bossy mother—indicates where our sympathies should lie. Maria’s bond with Peter doesn’t seem solid enough to explain what happens, despite Sláma’s heavy-handed incorporation of a water well that has hit bedrock.

The last quarter of The Country Teacher plays as if Douglas Sirk were back in the Old Country making a movie about Ludwig Wittgenstein, who taught children in an Alpine village until he was run out of town for hitting a student. If repressing dangerous feelings is your aim, plenty will recommend communing with nature and engaging in physical labor. But after all the torment and tumbling in the hay that occurs in The Country Teacher, even the thrill of helping birth a calf doesn’t strike one as a sufficient substitute for physical and emotional love. Maria’s explanation for how things end up— “Everybody needs somebody” —sounds rather pathetic. And it’s difficult to believe her call for forgiveness can quell the tempests in Peter’s mind, heart, and loins—let alone what they have wrought or might in the future. It’s as though Sláma fancies himself The Country Preacher.