The Education of Charlie Banks 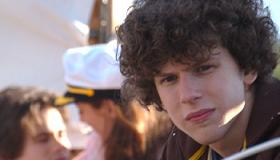 Greenwich Village in the early Seventies was a quite a different place pre-Carrie Bradshaw. The bricks were unforgiving and kids didn’t play nice. In the rough and tumble resides a youngster named Charlie (Jesse Eisenberg). He’s the bookish nerd who thinks too much about life’s sting and yet manages to cling to some form of status by shadowing his hip friend Danny (Chris Marquette). Together they are in awe of a tagging thug named Mick (Jason Ritter), who uses his fists (and broken beer bottles) to express himself. For Charlie, Mick is the monkey stomping on his back. He reflects, “Everybody grows up with the bogeyman under his bed. Mine terrorized Greenwich Village and smoked Newports.”

Childhood’s complications are left behind and college days arrive. Ivy Leaguers now, Charlie and Danny are undergrads chasing tail and figuring out how to think. They make good with a rich kid on the eight-year graduation plan named Leo (Sebastian Stan) who buys yachts on a lark and charters private planes for getaways to Martha’s Vineyard. Charlie is smitten with Mary (Eva Amurri), a voluptuous smarty who plays a good game of hard-to-get. Just when things are as dandy as can be, Mick reappears.

Tossing the stray dog into the refined and sheltered mix has been done before. What makes this attempt work is that the scavenger seems to be a likable force and genuinely wants to have the opportunities these kids take for granted. Frankly, Mick’s character is almost a spitting rehash of Matt Dillon’s Dallas Winston in Coppola’s The Outsiders. Mick steals the girl that Charlie is dreaming about and Charlie slowly loses his hand playing the gentleman.

Not many adults in this film outside of the barkeep and the professors—everybody is young and resisting growing old. The material plays like a long television drama but also does a little more with the scenes than just move characters along from place to place, though the film does a nice job moving between situations. The film also nails the uptown/downtown disconnect. The downtown folk carry a swagger and will get physical if need be, while the uptown sect live in polished dwellings surrounded by parents who read The Times while they plot their downtown adventures.

The case could be argued that the batch of videos Durst crewed and starred in may have built a foundation for this debut. Doubts were abound when he was initially set to direct the feature adaptation of Dogtown Z-Boys, though that fell through. For a first time outing one has to pay the backwards baseball cap wearing director some respect. In terms of subject matter, Durst is out of his element; it would have been easier to do a hip-hop story or tackle a tattoo parlor owner that won the lottery, but he decided to make a sort of modern Basketball Diaries with a little more brutality. The fight scenes are purposely extended and gruesome, and choreography is sound. Durst also has an ear to fit music to the footage with uncanny precision. And the cast is superb in their performances. Durst owes a debt to Casting Director Laray Mayfield.

For the most part, there is no reason why musicians need to become actors or any way to reason why actors need to conceive a fashion label. Why can’t everybody just dance in their respective box? Unfortunately nobody wants to be just a great actor or a platinum artist. Whatever the case may be for these dilettantes feeling the itch to show off their alter egos (boredom or just plain flights of fancy?) there are exceptions. Pants-down hip-hopper Mark Wahlberg can act. Can’t say the same for his brother Donnie, though. And Eddie Murphy made a valiant yet futile attempt at singing. But can Fred Durst direct? So far he hasn’t made a fool of himself.