close
Dreams or illusions, you decide 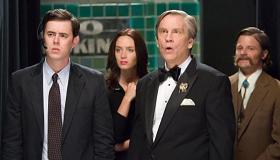 You heard it here last: the key to success in life is to find something you love to do and then make money doing it. However, if you’re an egotistical, washed-up celebrity, being recognized and admired is the best gauge of success. The difference between doing something because you love it and doing something because it courts acknowledgement is the lesson learned by mentalist Buck Howard (John Malkovich) in this sparkling, if imperfect, gem from writer/director Sean McGinly. Buck is the type of “take it and run with it” part that brings out the best in Malkovich (ditto to similar turns in Color Me Kubrick and Burn After Reading ) and without his winning performance there’d be much less to report. Box office prospects are minimal, but given the chance, this kind of under-the-radar comedy would fairly satisfy audiences before the march of the Memorial Day megaplex monstrosities.

The story of Buck’s resurrection is told through the virginal eyes of young Troy Gabel (Colin Hanks), who has gone against the wishes of his father (played by Colin’s Oscar winning pere Tom) and dropped out of law school for the vague notion of being a Hollywood writer. He ends up as road manager for Buck Howard, a long-ago top draw mentalist who appeared on ancient talkers like The John Davidson Show, Dinah! and Johnny Carson’s Tonight Show. Buck clings to the limelight with his fingernails, performing a cheesy act that is, if one is secure enough to admit it, pretty old-school fantastic. Buck’s signature trick is to find his cash performance fee hidden in the audience, but his biggest trick is making himself think he’s still famous. His condescending attitude towards Troy is not justified by playing half-empty auditoriums in flyover country. Still, Troy feels a warm sense of wonder in Buck’s act and tentative satisfaction that he’s in show biz, despite job responsibilities that include carrying Buck’s bags, tossing his Caesar Salads and working whatever mechanism inflates his ego.

The movie’s obvious progenitor is director Richard Benjamin’s wonderful 1982 comedy My Favorite Year, with Mark Linn-Baker tending to drunken movie star Peter O’Toole. Hanks basically plays the Linn-Baker role, but he’s not a strong enough foil for Malkovich. Buck may be the more flamboyant character who gets all the best lines, but this is still Troy’s journey, told through his voice over, and the 31-year-old actor remains, to date, a soft and middlebrow presence. This becomes more obvious with the introduction of Valerie (Emily Blunt), an attractive publicist slumming in Cincinnati to drum up interest in Buck’s ambitious comeback trick, where he plans to mass-hypnotize hundreds of people. As scripted and performed, Troy hardly earns Valerie’s bedside affections. But Troy, Valerie and Buck, all have something in common: neither are where they want to be, or feel they deserve to be, in life. Blunt adds further star power to the film’s terrific cast, which also includes Steve Zahn as Buck’s dumbstruck (emphasis on dumb ) chauffeur and the eternally cool Ricky Jay as Buck’s consigliore.

In exploring the world of fading celebrities, McGinly never patronizes. When Buck arrives backstage at a charity concert and greets Gary Coleman, comedian Jack Carter and Police Academy’s Michael Winslow, the warm hellos speak of those who’ve been spit out by the industry machine and survived anyway and God love them for it. There are moments when McGinley overplays Buck’s resistance to living in the 21st century (when told he’s being interviewed by an internet columnist he replies, “I don’t even know that paper”). But when he refers to estranged friend George Takei from “The Star Trek” (“may the force be in you”), Buck becomes a benign, if not lovable, egotist with a self-constructed wall of vague celebrity connections and fondly recalled memories that Troy is helping to maintain. Buck may earn titters for his lame attempts at name-dropping, but McGinly’s not above the practice. With his Cincinnati comeback trick a success, Buck earns appearances on Martha Stewart, Jon Stewart’s Daily Show, Regis & Kelly and Late Night with Conan O’Brien (all hosts making cameos). But that level of stardom is just not Buck. Buck is not a success because Vegas wants his act. He’s a success because he’s found his very own corner of Heaven. It may not be the biggest, but it’s plenty big for him.