close
Plenty of ectoplasm but no Bill Murray…

The Haunting in Connecticut 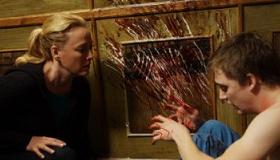 What the San Francisco Ghost Society referred to as a “Hollywoodized account” of a news story from the summer of 1987, The Haunting in Connecticut is an intermittently effective horror, made more frightening by the fact it’s based (if not precisely) on actual history. Story of a cancer suffering teen (Kyle Gallner) and his dedicated mother (Virginia Madsen), the film features some genuinely scary flourishes but suffers under the weight of pat dialogue, flat characters and directorial inconsistencies. Still, as a scary movie made for big screen grandeur, one hopes Haunting will make more of its bankroll in the theatres, with DVD sales following in good number.

Teen Matt Campbell (Gallner) has been approved for a cancer study that will allow his financially harried family to breathe a little easier. His father (Martin Donovan), an angry but recovering drinker, has recently begun his own contracting firm and the house’s second mortgage looms large. Sara (Madsen) decides the family’s best solution is to rent a home near the hospital. The house, a former funeral parlor and performance space for séances, is spacious, affordable and ready when Matt simply can’t be moved another mile. What follows is less a trek through the irksome American Spiritualist Movement and more an overtly moribund melodrama about ritual, retribution and rehabilitation.

Haunting skates across the surface of incredibly evocative histories and potentially fascinating characters but never delves deeply enough to engage—instead of “leaving us wanting more” it just leaves us wanting. The Victorian fascination with death and all its attendant practices is ground zero for eerie American suspense, and the poetic relationship described by film theorists like Tom Gunning and Gilberto Perez that link ghosts and the film medium (both are spectacular tricks of light) help add (ahem) “body” to a genre that’s often regarded as broad or lightweight. But Haunting doesn’t precisely go there. Instead, it treads the common and familiar terrain of melodrama.

It’s perhaps prescient that Haunting plays in archetypes and high drama because it’s period of inspiration, the Victorian era, was entrenched in such storytelling. Here, Madsen’s faithful and dedicated mother is a bastion of fortitude; her angry-drinker husband is a model of weakness and their tortured son, who’s wiser than his years, is the film’s symbolic contribution to the lexicon of innocence and its triumph over evil. While they exist in America 1987, these characters are the sort American Biograph would have presented in sepia and silence.

Matt’s cancer treatments, while never explained in the film, are described by a doctor as “waging war in Matt’s body.” This is poetically echoed in Matt's repeated recitation of the “Backwards Poem” which begins “One bright day in the middle of the night, two dead boys got up to fight.” It’s reasoned that Matt is near death and so more able to see the space between the living and the dead.

For as flawed as it is, Haunting features too many good bits to disregard. The acting is notably lackluster, which is surprising considering it’s cast with actors like Madsen and Elias Koteas, the latter of whom is Atom Egoyan’s repeat collaborator. Director Peter Cornwell treats us to some marvelously jolting “knock, knock boo” moments, but he also does a lot of film stock switching and jumping from dark spaces to light ones, which is quite distracting. Where the film excels is in the moments of haphazard apparition. A door swings open and you get an accidental glimpse of a dead man walking. The TV (playing Harold Lloyd’s The Freshman at one point and Cornwell’s own stop motion Ward 13 in another) goes black and a form is visible in the screen. Thereafter, every reflective surface becomes a reason to be alert and every oddly moving object a menacingly animated corpus. Moments of anticipation, particularly in the earlier parts of the film, are handled very, very well, though that anticipation peters out some and performers lose the capacity to bring believability to lines like “No God, you can’t have my son.” For an odd little relic—or should I say throwback?—the film’s scary parts certainly stick to you. You may laugh at the dramatics but you’ll be afraid to turn the light off when you go to bed.