close
More thrilling than the first but far less frightening

The Last House on the Left 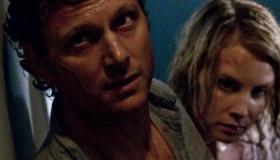 Dennis Iliadis’ remake of Wes Craven’s 1972 Indie Scream trades the psychological violence of the original for an uncontroversial (but still thrilling) aesthetic intensity. The overall impact of the remake is not as lingering as the original, but is—for the duration of the viewing—more viscerally intense. Another rehashing of an important cultural landmark, Last House comes out following a rash of classic horror remakes ( Hills Have Eyes, Friday the 13th ) and alongside a remake/continuation for families ( Race to Witch Mountain ), suggesting a trend in whitewashing notable titles from a rather revelatory phase in American film. Much of the truly horrible stuff of the original is softened here or omitted altogether, and that absence of socially controversial content should hinder the remake’s overall longevity. At the same time, kids who don’t know any different will likely make it a big hit at the box office.

The 1972 Last House was not a thriller in the “edge of your seat” sense but it certainly packed a wallop—the majority of its impact came from film’s total lack of a moral center. The villains, a family of criminals led by an escaped con with the Cro-Magnon moniker “Krug,” were wholeheartedly depraved. Krug and his “animal-like” woman had sex in the crew’s stolen convertible (top down) while they drove from the pen to the city. Junior, the leader’s son, was a dimwitted follower with occasional pangs of conscience; it was implied he was mentally challenged and his father addicted him to drugs to control him. The violence the criminals exacted on their haphazardly kidnapped victims involved multiple rapes (both heterosexual and homosexual) with all violence enacted for the enjoyment of the criminals—there was never any greater reason, situation or circumstance motivating the villains, they just got pleasure from perversity. When the parents of one victim, guided by less explicit evidence of far worse wrongdoings, elect to exact vengeance on their child’s murderers, they do so in ways just as depraved and sordid. Moreover, the parents lower themselves to the level of their child’s murderer and recover nothing in their reprisal: this is pure, gross vengeance complete with a dim police officer who begs the parents not to go through with it, forecasting their future behind bars. Where the 1972 film implied that the brutalities of the criminally insane could just as soon be perpetrated by the morally upright, politically central, upper-middle class, the remake transforms every criminal activity (whether done by the decent or the cruel) into happenstance or strategy, reducing the story to a melodramatic tragedy, bleached of its psychosocial implications.

The remake kind of neuters the unpredictable (and sometimes wild) characters in the service of making them less ethically complicated. Mari Collingwood (Sara Paxton) was once a “bad girl,” but since losing her brother a year earlier has taken up competitive swimming and turned a new leaf. Her parents take the family to the country house for the summer and, stifled by memories of her brother, she gets permission to take the car out and see her childhood friend, Paige (Martha MacIsaac). Paige is charmed into buying pot off Justin (Spencer Treat Clark), who innocently takes the girls to the motel where he’s staying. Paige lures Mari back into old habits and it’s not long before the three get caught smoking by Justin’s Uncle Frank (Aaron Paul), father Krug (Garrett Dillahunt) and their girl-toy Sadie (Riki Lindhome). As the gang’s faces are all over the front page announcing Krug’s escape, they have a legitimate reason to detain the girls. Planning to skip town, the group and hostages start a drive to the highway when a series of circumstances forces the villains near Mari’s house. There, the girls are further brutalized until a storm forces the criminals to unknowingly take refuge with the Collingwoods. The violence portrayed is more graphic than expected (torture porn has upped every visually visceral ante, after all) but it’s all the kind of shock-and-awe you walk away from unscathed. Sure, you’ll flinch and cringe, maybe you’ll cover you eyes, but even after the final, goofy, utterly unnecessary murder, you’ll have no problem going out for dessert—and you’re certainly less likely to debate the deterioration of bourgeois values in our fair nation.

Direction by Iliadis is, in turns, artful and odd. While he does fantastic things with more brutal sequences—directing tense scenes as others might direct a tightly choreographed fight—he also lapses into these moments of autonomous camera movement, roaming around empty spaces in search of characters, and so suggesting the house has its own identity. It’s lovely, but the syntax doesn’t compute. Also, one senses he might be trying to reinstall the moral and emotional ambiguity that’s been sucked from his remake by overdoing the rack focus, whose constant shifts are all the poetry and lyricism this film has to offer. (Lyricism in violence was probably the most poignant and conflicting contribution of the original—it trumped the old “criminal celebrity” trend in horror any day).

One has to wonder how Wes Craven (the man responsible for the original) and Sean S. Cunningham (the man behind the 1980 Friday the 13th ) justified these alterations in the updates to their career-making turns. Perhaps the mainstream softening of their films moral landscapes performs the dual role of making certain horrors easier to tolerate and protecting the original’s place in the canon. But, even if they lack the controversy of the originals, these substitutes they’re producing aren’t bad: in fact, The Last House on the Left is a properly horrifying night out.