close
Neo-noir with tongue in cheek 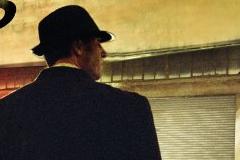 If Dashiell Hammett met Bruce Lee by way of Dostoevsky the results might be close to what we get in The Perfect Sleep, a contemporary film noir that has enough fighting and killings for five martial arts flicks but wraps itself up in the best tradition of Bogart. In this dark, trippy homage to Sam Spades everywhere, a nameless man returns after a decade long absence to a city awash in violence in order to save the love of his life, a woman he grew up with who now seems out of his reach. Arty, bordering on total parody but undeniably entertaining in its single-minded devotion to all things Noir, this limited indie release should eventually find an appreciative audience on a DVD shelf full of all the ‘40s thrillers it tries so hard to emulate (mostly with a wink).

Director Jeremy Alter and writer/star Anton Pardoe, a couple of former location managers who previously collaborated on the 1999 short mafia spoof The Godson, make their above-the-line feature debuts with this noirish Valentine that tries to keep a straight face as it tells the story of a man (Pardoe, credited only as The Narrator) once labeled “The Mad Monk,” who returns to the brutally dark and tough city he left behind a decade before. Captured by a group of assassins including his father figure, Nikolai (Patrick Bauchau) and a childhood friend, The Rajah (Sam Thakur), The Narrator must outwit and face a group he shares a long history with in order to save the love of his life, Porphyria (Roselyn Sanchez) who is now married and has a child.

From the opening sequence set against the picaresque windmills just outside Palm Springs, the movie firmly plants its tongue in film noir cheek with incessant narration that seeks to explain the mystery man’s predicament. The voice over is like a continuing stream of consciousness as he guides us along with bon mots like “the only problem is when I sleep I REMEMBER , and nothing hurts quite like that.” Quickly going to flashbacks we see his tortured childhood and early relationships that set the stage for his return to the non-descript city that is never identified but always seems to be appropriately shrouded in eerie darkness.

The film’s best sequences are set in a cavernous fortress-like settings where he meets up with a diabolically clever killing machine named Dr. Sebastian (Tony Amendola) and Nikolai’s prized pit-bull of a man, Captain Keller (Dominiquie Vandenberg), whom he faces in a fight to the death. Beaten virtually to a pulp, the eventual fun of the film is watching as Pardoe keeps consistently coming back from the brink to land a knock-out punch against his formidable foes.

Giving himself a prime showcase to show off his considerable skills, writer/star Pardoe seems like he could have a promising action career down the line. Under Alter’s confident direction, he plays it all with a poker face that suits the material and keeps this tricky cine-soufflé from falling into dopey spoofing. The well-chosen supporting cast also deliver with especially sharp turns from Sanchez, Bauchau and Amendola who act this script as if it were Shakespeare.