close
The Sheep Thieves, plus romance! 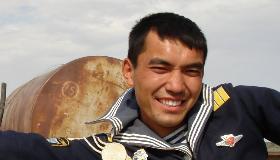 Visionary filmmaker Sergei Dvortsevoy jostles with comical threads in Tulpan, but breaks from the punch line to offer so much more. In the attempt to follow a coming of age story about a boy’s transition into manhood, a subliminal odyssey of the human spirit takes over. It could be a hard sell but this neorealist Kazakh work is worth your time and dime—once in the theatre and experiencing this triumph of cinema, the few in attendance will be all the wiser.

Daunting is the opening black frame, over which we hear the blood-rushing sound of pounding terrain. The throbbing intensifies to such a fevered pitch that one imagines the noise could be a slowly detonating bomb or a space shuttle on all boosters blasting-off from Cape Canaveral. Not an image appears for several long ticks, which makes this furious dark buildup more brutal. And then we see a genesis of light. A stampede of sheep, goats, camels and cattle are everywhere. You’re immediately pulled into the heart of what is the livelihood of a nomad on the Southern plains of Kazakhstan: his herd.

Meet the decorated sailor who’s going on about slaying fabled sea creatures to court a daughter’s peasant parents. “You have to bite it between the eyes,” he spouts on how to slay an octopus. The play? The young showoff is Asa (Tolepbergen Baisakalov) who is prospecting on a spouse and, if successful, will be gifted a herd of his own to shepherd. Without livestock he’ll remain a nameless hand on the ranch tending to his no-mess older brother-in-law’s flock. They come together, brothers-in-crime, along with Boni (Kazakh’s modest version of Flavor-Flav), a perverted gold-toothed cohort who delivers cucumbers and trinkets in his porno billed jalopy jeep. Together, they bring a dinky chandelier and promise 10 sheep to win over the stubborn parents of the girl who chooses to remain hidden, merely peeking behind white curtains.

Never before has the idea of an arranged marriage been given better treatment than in this film. You want the parents of the unseen dame (aptly named Tulpan) to foist their daughter over and let her be united with the amateur romantic so he can sire his own flock. The first sell seemingly goes well. Asa is buoyantly dancing to a reggae track while hanging onto the jeep, gleefully screaming at a pack of camels putting around the flatlands. But the damper of spirits comes when his elder brother-in-law Ondas (Ondas Besikbasov) said that the prized catch (perhaps the only female this side of the Black Sea) denied him because of Asa’s oversized ears.

Back at the ranch, life is a blend of tempest and redundancy. Asa’s sister Samal (Samal Esljamova) is a gentle and disarming force in the quiet chaos. She effortlessly plays the loyal sibling despite being caught in the middle of a feud with her draconian husband. Between sandstorms, she dutifully goes about her daily rigor by setting dinner rolls on top of a crinkled metal roof to rise, pump milk out of rice with a wooden stick in a long metal pipe and duet with her daughter. The kids labor in their own way. The oldest son is responsible for rehashing the day’s news by listening to the radio and reciting each section on-cue from breaking news to arts and culture while he pops blackheads from his dad’s tired back at the end of the day. And the little toddler tries to mimic his dad by riding a stick to serve as his horse. Meantime, in the background, one bronco is mounting the other; the oblivious tot keeps playing with his stick. Life on the prairie is buck wild.

An epidemic befalls the herd as there’s a spate of stillborn lambs. Panic sets in and Sumal wants the family to move off the land and find new digs elsewhere. The urgency to find Asa a mate intensifies. He returns to Tulpan’s a couple more times and while he still rants about the sea monsters he breaks script and whispers to Tulpan while she’s hiding in a hut outside—only a wooden door between them. Asa talks about his dream that is painted on the back of his sailor’s collar—a farm with camels and sheep and a hut under the starry night. Her parents are unmoved despite the reappearance of the token chandelier, and even a cutout portrait of Prince Charles and his goofy noggin smiling with Princess Diana. The ploy is to show that even royalty is not always perfectly proportioned.

Despite the multi-pronged attack, it seems Tulpan wants to venture to the city and attend college. This rootless life in the open range is not for her, so say her parents. So too is Asa tempted to try the big city and take his chances there with his smutty pal who wants to lay some of the bevy of buxom bimbos rumored to be around for the take.

The narrative is dictated by nature. The only taste of the world beyond this endless desert is the creative imagination of its inhabitants and some hints of modernity: a gashed, old magazine that hawks car ads or radio waves that import impotent news. When a huge earthquake hits infinite kilometers away, does it really shake things up here? The eye is isolated and the tornadoes and disease poised to strip away the future in the wag of a sheep’s tail are very real. Instantly, you are wandering in this lawless bazaar and thrust into unforgiving conditions that cake onto you like dust storms.

Tulpan provides a wormhole into a world where the viewer becomes a nomadic sand grain whirling around and settling into the lives of a family and then flying up again to the next destination. Longing to stay and resonate for a bit is not an option—the moment comes and it goes. Luckily for us, there will be the prospect of rewind so that the picture can be played again and again.