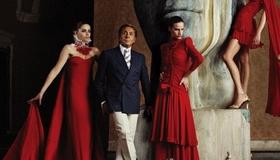 Famed Italian couturier Valentino stands as an icon for the death of art in fashion in this doc by Matt Tyrnauer. Beautifully organized, the film moves seamlessly from Valentino as “the celebrity,” into the business behind his brand name, the encroaching threat of his company’s new owner and the ultimate end of the professional and creative freedom that made it possible for Valentino to “assume the throne” from which he famously reigned. If word spreads (and it should) the Bravo crowd should seek this title out, though a future on tube will likely be the film’s most profitable home.

Valentino’s 45 year long career spans so many massive changes in the look and business of fashion we should see him as a survivor or a chameleon—but we don’t. As with so many icons, Valentino seems stubbornly wed to a very distinct style and method of business that feels unchanging. Some might call it “classic” but in this case, “classic” isn’t as enduring as it sounds.

Valentino’s partner, Giancarlo Giammetti, the man famous for living in Valentino’s “shadow,” didn’t appear in Valentino’s universe until the middle of an early-career rough patch. Once Giammetti and Valentino found each other (in a Paris café neither seems so sentimental as to recall) both their lives changed course. Their ambiguously defined relationship is the reason the Valentino brand is aligned with fashion royalty. Giammetti’s business skill assisted Valentino in building his name among society mavens (Jackie O was a famous client) and diversifying product lines to broaden the exposure of the brand name (remember the Valentino Jaguar?). However, in 1998, a multinational corporation purchased Valentino (the company), and since the takeover assumed a constantly increasing amount of control from the designer, forcing Valentino (the man) to inch towards retirement. A successor was suggested early in the coup but the threat ended with bonuses. Following what looks to be an inevitable dethroning, a retrospective is launched to honor the designer and awards are given in regal and historic surroundings—but the repeated involvement of the Valentino COO (and world-famous playboy) Matteo Marzotto begins to look like an albatross around Giammetti’s neck and quickly the strain can be felt in the final workings for the retrospective event. Coordinators and designers are brought in to add hyper-dramatic flourish to the occasion: models are strung on ropes in famed Valentino gowns and swung like gymnasts for an applauding crowd of celebrities and industry insiders. The excess is so fever-pitch it boggles the mind. The Valentino red that the “air dancers” wear evokes the Grand Guignol rush of fabric that would flow from a deposed King’s beheaded shoulders in an opera and begs the question: is this decadence it’s own undoing?

Implying that Valentino’s retirement signals a death in couture, a journalist asks him, “What will come next?” Valentino replies: “Après moi, le déluge.” A famous phrase of unsure but courtly origins, the statement (meaning: “After me, the flood.”) is darkly prophetic, signifying the end of a King-as-Country era, the coming of a revolution but, most notably, the change-over of an identity both singular and plural. That capitalism is to blame is as tragic as it is woefully predictable, but my, how gracious it is to watch the predecessor in such elegant detail, and how useful it is to have a grand reminder of precisely how greatness looks.