close
It's a Wonderful Life for tween girls 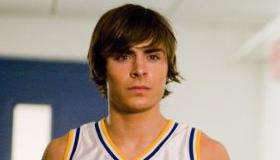 Within seconds of the new film 17 Again, the opening shot gives its hardcore tween audience exactly what their parents’ hard-earned money allows them to see: leading man Zac Efron playing basketball. And as an added bonus, Efron gets to play basketball topless and drenched in movie sweat. It’s true that the High School Musical alum has more to do in his new film than just dance and perform pratfalls but it’s also true that whatever plot 17 Again has will be lost on its young female audience because they’ve come to see Efron and everything else is an afterthought. His built-in audience and studio support ensure a strong opening weekend at the box office with moderate to negative reviews barely making a dent to Efron-lovers everywhere.

The film is a slightly modified tween take on It’s A Wonderful Life. Of course I’m dating myself by mentioning the Christmas classic so if you have no idea what It’s A Wonderful Life is, 17 Again is going to seem wildly original. The basic setup for both films is similar, a depressed and disillusioned man wishes his life were different and is shown by an angel how things would change if he never existed. In 17 Again, the man is Mike O’Donnell (Matthew Perry) and he’s never gotten over senior year of high school. Young love overshadowed college which, years later, has led to two distant kids and a failed marriage. Enter a mystical high school janitor whose way of helping Mike is to transform him into his 17 year old self (Zac Efron), apparently to live out the present in his younger body and do things right the second time around. How fixing adult problems as a teenager seems like a good idea to anyone is beyond me but that’s the kind of logic 17 Again insists on using.

Mike’s high school troubles seem even more complicated than ever as he tries to deal with a new generation of adolescence. But in true movie logic, whenever there is a slight hint of conflict or envelope pushing, the film pulls back and retreats to safe territory. When young Mike interacts with his present family and threatens to change things by exposing his true self, bad sex jokes swap out real drama. Even worse is the film’s ending, which is (without revealing anything) a bunch of predictable nonsense. Ending on this note seems to spit in the face its audience. The ending, however, isn’t the only instance of audience disregard: director Burr Steers repeated uses fades to cover plot holes and logic leaps.

Tween audiences may be susceptible to Zac Efron’s smile and basketball skills but I’m sure their adult guardians will wonder what all the fuss is about.