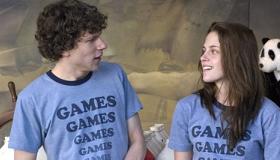 While fans of writer/director Greg Mottola will no doubt be relieved at his return to indie auteurdom after enjoying the fruits of commercial success as Superbad director-for-hire, they ought not expect a complete return to the form of his 1996 breakthrough film The Daytrippers. Poignant, funny and touching as semi-autobiographical memoirs often are, the ’80s period milieu of Adventureland nonetheless invites unflattering comparisons to the films of John Hughes which remain the benchmark for pictures of this type. Even still, it should enjoy respectable enough play in college towns and among ‘80stalgics to earn Mottola another solid shot at delivering on his potential.

Jesse- The Squid and the Whale -Eisenberg stars as James Brennan, a recent college grad whose plans for a trans-European vacation before graduate school are derailed when his family hits a fiscal speed bump. Facing summertime confinement to his native Pennsylvania town and the scant employment opportunities it offers, James takes a position at the Adventureland amusement park, where an odd caste system favors those who work on “rides” over the lowly unfortunates in “games.” Juggling park politics with the unpredictable hijinks of an abusive and unappreciative public—for near-minimum wage, no less—is a rough substitute for Europe, but James finds his silver lining in a budding friendship-cum-romance with a fellow “games” minion named Em (Kristen Stewart), a dark-edged beauty with enough family and emotional baggage to last a lifetime. This is uncharted territory for someone like James—a pretentious intellectual with little substantial life experience—although for those who actually watched movies during the 1980s, it’s just another coming-of-age portal.

As a snapshot of a particular place, time and sensibility, Adventureland almost cannot help but succeed—from the pitch-perfect ’80s soundtrack to such gleefully entertaining supporting characters as Margerita Levieva’s Lisa P, a sassy-sexy collision of hair, powder-blue eye shadow, acid-wash jeans and an insatiable urge to dance, this is as close to a pure ’80s valentine as anyone has made since the 1980s. But Mottola’s film aims to go deeper, expressing something more fundamental about the awkward, painful transition from immaturity to maturity than what’s typically addressed in coming of age films. Unfortunately, there’s a quandary in such ambitions—to acknowledge the truth that life rarely, if ever, cooperates with youthful hopes and dreams would be to strip the film of any commercial resolution, all but dooming its prospects with the thirtysomethings and fortysomethings who least wish to be reminded of such realities. So while it’s understandable that Mottola ultimately pulls his punches and pushes the film in a less credible direction than its premise initially suggests, it’s equally impossible to resist imagining how the now reclusive writer/director of such ’80s classics as The Breakfast Club and Pretty In Pink might have navigated the same waters.

None of this is to suggest that the film doesn’t have its moments, most of them anchored by a first-rate supporting cast, including Saturday Night Live regulars Bill Hader and Kristen Wiig, a refreshingly temperate Ryan Reynolds, the aforementioned Levieva as well as character actors Martin Starr and Matt Bush. Ironically, few of the moments really belong to either Stewart or Eisenberg, two popular young performers who nonetheless remain something of an acquired taste. Eisenberg’s stilted precocity is rarely endearing and it’s not entirely clear if it’s meant to be—with only a handful of films to his credit and very little modulation between the respective performances, it remains to be seen if this is a function of a limited talent or simply casting to type. Either way, the film is largely his to carry; a choice which, in time, will either confirm Mottola as one of Hollywood’s smartest young directors or just another hit-and-miss indie filmmaker.