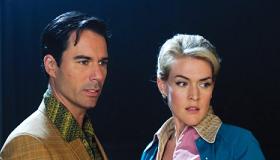 Shocking! Astounding! Terrifying! Well, actually Alien Trespass is none of those things, just a highly entertaining retro Sci-fi blast from the past that is loads of fun, an endearing tribute to all those bad movies we just loved. Indie production was clearly made on the cheap (just like all the ’50s movies it apes), so audiences not in on the joke and looking for more sophisticated use of special effects will probably stay away, making this a better prospect down the road on DVD where it has a shot at finding fans who will appreciate it for the big wet kiss it throws to The Blob and its ilk.

Set in 1957, prime time for the movies it parodies, the film opens on the beautiful star-filled night. Astronomer Ted Lewis (Eric McCormack) is celebrating his anniversary with wife Lana (Jody Thompson), meanwhile waitress Tammy (Jenni Baird) is in another part of town. Both happen to see what they think is a shooting star but really it’s an alien spaceship. Shudder!!! Lovers Dick (Andrew Dunbar) and Penny (Sarah Smyth) witness this crash landing and are freaked by the slick metallic Urp who emerges from the ship. Urp is concerned that one-eyed Ghota has escaped, and now he is the only one who can save society from this menace. To do this he must infiltrate the body of Ted and partner with true believer, Tammy.

There can be no question that the creators of this film really love the 50’s Sci-fi cheapies like The Blob, Invasion Of The Body Snatchers and It Came From Outer Space. Those “classics” have managed to live on and been imitated, even remade over and over. Alien Trespass does such a good job copying their style it probably could pass muster as any one of them. With a strong assist from the authentic screenplay by Steven Fisher, producer/director R.W. Goodwin really seems to get what makes this kind of story tick. This is no Saturday Night Live sketch but a full-blooded, affectionate re-creation of one of these monster flicks.

Purposely foregoing the use of CGI trickery, the special effects here look like they were done for a price, exactly right for what Goodwin and company are trying to achieve. This team is not mocking this type of movie, but celebrating it. By making the main hero a woman however they have bowed down to 50 years of progress, something that never happened in the actual male-dominated movies Alien Trespass embraces.

Actors from Will And Grace ’s Eric McCormack and Jody Thompson to the fetching Jenni Baird all seem to get it too, and their sweet, believable approach to the stilted dialogue is just right and natural enough to keep us involved. Dan Lauria and Robert Patrick are skeptical cops who also add to the fun.

Some younger audiences probably won’t get Alien Trespass but for those lovers of pioneering cinematic Sci-fi and B-movie fun, it’s a winner and a welcome respite from the age of computer graphics.