close
Because “prom” is really just code for “foreplay”

Bart Got a Room 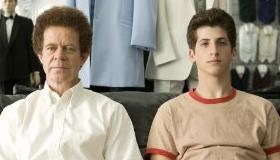 A Florida nerd tries to bag the biggest trophy of his life, a date to the prom, in AFI-trained director Brian Hecker’s sweet and funny trifle. While hardly the most novel of stories, what puts Bart Got a Room above the norm is a tight and charming screenplay and Hecker’s way with mood and place. Its other notable trait is a lack of sarcasm and raunch, something that may not endear it to the Superbad and American Pie crowd. Still, winning performances by the young leads, augmented by supporting turns by recognizable adults, should get Hecker out of Florida and into a higher-class neighborhood very soon.

Who one takes to the prom is a key question in any boy’s life, since it has nothing to do with education and everything to do with ego, self-esteem and reputation. From the get-go, it seems natural that Danny (Steven Kaplan, just terrific) would ask best friend Camille (Alia Shawkat), but there are too many other tasty morsels around campus to settle for vanilla. But as he starts playing the field, he realizes a prom date is truly an elusive creature. The blonde cheerleader he ferries to school (and who licks her ice cream cone most seductively) sees him only as a “reliable old Buick”, while the willing Asian girl is so paranoid about being spotted by her actual boyfriend that she doesn’t want them entering the dance hall together.

With its Jewish characters, wonderful big band score and coming-of-age storyline, Hecker’s film is reminiscent of the work of Neil Simon, even if Hecker doesn’t have Simon’s knack for character crafting and joke-couched truth telling. In fact, Danny is the least interesting person in the movie, our interest coming only from being the person whose journey we’re following. Hecker does better with the adults, who are archetypes, but vibrant ones. Most notable is William H. Macy, sporting a hilarious Jewfro as Danny’s father, Ernie. Recently divorced from Danny’s mother, Beth (Cheryl Hines), Ernie is eager to impart his extremely limited skirt-chasing wisdom to his son. Also funny is Jon Polito as Beth’s new boyfriend, the stranger to the family trying so very hard to be liked by Danny.

As the days wind down until zero hour, Danny becomes increasingly desperate. Not only has everyone, including Camille, found a date, but most have already booked their post-prom hotel room. Even Bart booked a room, a fact that lights a fire under anyone yet to do so, lest they be bested by the school’s most uncool student. Hecker shoots around his hometown of Hollywood, Florida and his camerawork is appropriately low-key. He knows when to lock the camera down and let events unfold naturally within the frame, as in the terrific moment when Ernie simulates orgasm to determine the thickness of his apartment walls. Populating the edges with reminders of Florida’s geriatric environment only increases Danny’s urgency to write a winning chapter in this early history of his sexual life.

Bart Got a Room is a nice little movie that feels wiser than its years, but its pat ending leaves us thinking it should have added up to more. Ernie and Danny’s relationship is the heart of the film and where the film works best. It wouldn’t be surprising if Ernie never went to his prom and now he’s trying to live the moment through his son. Or maybe Hecker, who has said the film is partly autobiographical, is working out the issue of not having attended his own prom. If so, he’s found a form of therapy that everyone can enjoy.