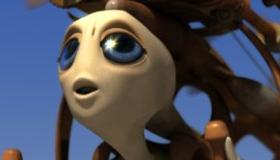 Battle for Terra is one of the first non-Pixar, non-Dreamworks, non-Anybody-You’ve-Heard-Of 3D animated features released since Jeffrey Katzenberg began shoving the form’s rebirth down our throats with his non-stop evangelism. The former Disney chairman knows that not every 3D film will be a budget-busting studio event yet, like its live action brethren, animated features financed independently needn’t be any worse than those financed by the studios. However, seeing how polished these films have become, the good folks at Snoot Entertainment were brave indeed for finding a way to tell the story of a peaceful planet fighting for survival against alien invaders. And even if the film doesn’t have the clever scripting and spare-nothing bloat of big-box product, it has a pluck and a pull that refuses to let go. Unfortunately, animated films without a culturally-approved Pixar or Dreamworks banner have a tough time and Battle for Terra will be no different. But, like the tadpole shaped aliens whose world is under siege, this minor yet feisty animated work is prepared to put up a fight.

The movie is an expansion of a 2003 short from director Aristomenis Tsirbas, a Toronto native and visual effects artist on James Cameron’s Titanic. It was originally conceived as a 2D release, but after garnering interest from distributors, the film was re-rendered in 3D. The added dimension is most helpful in conveying scale, which works beautifully because the Terrians live in the clouds, literally and figuratively. A doe-eyed, fully-clothed cross between a seahorse and a sperm, the Terrians know only peace. Their tails propel them gracefully through the air, and their homes are carved into gargantuan, jellyfish-shaped trees with mushroom cap tops. It gives off a dreamy and immersive sense of newness, with steampunk vehicles, flying whales and endless sky that Magritte would have appreciated. Our Terrian heroine is Mala (voiced by Evan Rachel Wood), an adventurous youngster with a knack for building mechanical devises, a convenient attribute (one of many narrative conveniences in Evan Spiliotopoulos’ script) when her planet is attacked from space by aliens orbiting in an enormous, gyroscopic mother ship. In the first of the movie’s well-executed dogfight sequences, an alien scout chases Mala until she causes it to crash. She drags the injured pilot back to her home and takes off its helmet. As it turns out, the pilot is, drum roll, pleasehuman.

Tsirbas has said in interviews that he wanted to make an alien invasion film where Earthlings are the aliens, but the allegory-police should relax: this is not anti-Iraq, anti-nation building screed. However, it does convey a light environmental message. In this far-off future, what remains of humanity have spent centuries aboard their now-dilapidated, gyroscopic Ark in search of a new home planet after ruining the first one by exhausting its natural resources. Terra, as the humans call Mala’s world, is not perfect. Colonization requires conquering the natives and the planet’s atmosphere needs to be fully oxygenated, a violent process that will kill off every Terrian on the planet. The Terrian’s only hope is Mala and her newfound friendship with Jim (Luke Wilson), the downed pilot. Jim’s allegiances are torn: he doesn’t want all Terrians to die, but if they don’t, humanity dies.

In its opening moments, Battle for Terra gives off a pretty unimpressive vibe, a straight-to-video feel that comes from too much chipper dialogue and CGI faces and bodies lacking in detail. But the movie reveals some tough-minded layers. There’s vague talk of Terrian society being not only pacifist, but fundamentalist to the point where they have no ability to defend themselves and assume the invading force to be long-awaited gods. How the Terrians fight the invaders is a convenient nod to the Forbidden Zone from Planet of the Apes, but it adds another intriguing (if unexplored) layer. And the aerial fight scenes (the humans fight in ships shaped like the Cross) are plenty intense for a PG rating.

Otherwise, it’s hard to defend a movie that establishes its conflicts in such bald terms and whose script has none of the snap and emotion of even a mediocre Pixar film (if there were such a thing). The villain of the piece is General Hemmer (Brian Cox, the best in a voice cast that also includes David Cross, James Garner and Dennis Quaid) a lantern-chinned leader of no moral reflection and no qualms about destroying an entire race so humanity may live. The movie’s answer to this central question (will Hemmer’s plan prevail and should it prevail?) makes for a nice message, but Tsirbas could have been cleverer. Still, you find yourself cutting the film a lot of slack. Maybe that’s an acknowledgement of its independent spirit. Maybe that’s an acknowledgment of its brilliant sound design. Either way, Battle for Terra is a perfectly nice, if gauzy, lesson in can’t-we-all-get-along politics and environmental awareness. Yet, given its peaceable themes, should we be ashamed that its most memorable passages are also its most violent?