close
Fast, cheap and out of control 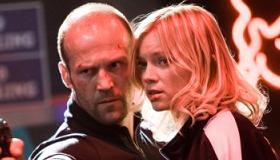 "Is this making any sense to you?" asks a character in this sequel about a brute (Jason Statham) with the terrible luck to have gangsters hardwire his body again. Of course not, and so much the better for this burgeoning action franchise that operates on its own gonzo, wonderful logic. Crank High Voltage sizzles with comic brutality and audiences will eagerly tap into its energy, enough to give this glorious B picture B+ box office receipts.

First, a primer on hitman Chev Chelios: In Crank, evil gangsters injected him with a cocktail that would stop his heart if his blood wasn't pumped with adrenaline. Cue rampage. When it was certain that no matter how many jaws he socked or guts he shot Chev was still doomed, he took himself and his poisoner out with a plummet from a helicopter—a fall so long, he had time to call his girlfriend Eve (Amy Smart) and say goodbye on her answering machine. Yes, as the anchorman who opens the film opines, the last day of Chev's life was "a day that can only be described as “implausible.'"

But Chev came back. With some help—or really, harm—from Chinese organ harvesters who scooped up his corpse to sell the famous Chelios heart to their gang's ancient patron (David Carradine). In its place, they wired the comatose Chev with an electric heart to keep his body juiced long enough to steal his second most impressive organ, the one in his pants. Chev stirs. "F*** that," he grunts. And the game restarts, with the twist that Chev has to keep his electric heart charged by any means necessary: jumper cables, shocking dog collars, car cigarette lighters, static electricity. When cops taze him, bro, that's a good thing.

Ultra violent films like Crank are decried as the sociopathic fallout of a video game culture in which life is cheap and death is fun. Writer-directors Mark Neveldine and Brian Taylor embrace the insult. In the opening credits, they pixelate Chev into an 8-bit hero, and even when the flesh-and-blood Jason Statham steps into the role, he knows we're rooting for the joy of chaos, not for a human with feelings. When the film explores Chev's childhood, we're only treated to a hysterical scene where the callow lad boasts of his love for video games on a talk show about youths destined for damnation. Even the shady doctor in his corner doesn't care more for him than, "I'm stoked you're alive, dude!"

"Do you think I'm having a f***ing laugh," Statham growls. And what's so great about his performance is he never is. He's the only action hero of today who glowers, not winks, at the camera. The Rock and Vin Diesel mug between dustups, but Statham is full-body committed. He's been called the Buster Keaton of action and the comparison is perfect. Both shun words for movement: Anyone can throw a blow; Statham's blows are calibrated to the energy in his battery—we're always aware of his voltage. Sure Meryl Streep can do accents, but can she roundhouse kick a guy on one bar of juice?

With their one-two combo of Statham and mayhem, Neveldine and Taylor knew they were on to something with the first Crank. The sequel is even better. They've cut out the dreamy poetry of Statham blissing out on a motorcycle, toughened Smart's whiny Eve and pulled back just enough from the original's queasy racist and sexist bullying. They've even redeemed the used and abused Latin tranny by inventing an identical twin Venus (Efren Ramirez) out to avenge his brother's murder. Crank High Voltage isn't pulling its punches, it's stripping them from all the undertones that made them less fun. It's so frenetic, the subtitles can't stay the same color or font. It's racing so fast, the time cuts forward to nine seconds later. Crank High Voltage delivers everything it promises—if it were a politician, it'd have my vote.