close
Not quite ready for prime time 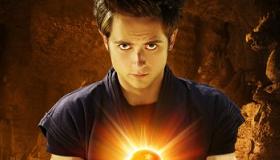 There are seven Dragon Balls, and the wonder they’ve caused has fostered 25 years of manga and cartoons. Yet somehow, this feature film, dedicated pretty wholly to the mystery of said Dragon Balls, can't eke more than 84 thin minutes to contribute to the saga. With its core audience more likely to download it illegally than risk human interaction and disappointment at the multiplex, financial prospects are dismal, which is fair enough for a film that appears to have cost its studio chump change.

If you've come across Dragon Ball either on a lazy, syndicated afternoon, or on a lunch box, or in a vending machine at the grocery store, you'll recognize Goku (Justin Chatwin). You knowthe one with the porcupine hair. In the cartoon, he's an alien with a monkey tail. Here, he's a tailless teen who's yet to learn the full extent of his powers. We empathize, though Ben Ramsey's origin myth script isn't cluing us in enough. Goku's grandfather Gohan (Randall Duk Kim) is training him for something, and he's got special powers either developed or innate, but in trying not to bore their fanbase, the film seems to operate on biographical fast forward.

At the midnight screening I attended, I actually enjoyed the opening half hour. Partially, it was the buzz of being in a theatre of diehards who burst into whoops at the opening credits. Chatwin has a gawky confidence that's easy to embrace—even when his character, the bullied school weirdo, speaks school shooter-ese about his ache to wreak vengeance on the thugs who embarrass him in front of crush Chi Chi (Jamie Chung). As grandpa Gohan—a sage who carries himself like a kung fu mystic, speaks like a Nebraska football coach, and literally walks on water—has ordered him to keep his fists of fury a secret, Goku isn't allowed to crack every skull on the football team. But in the film's niftiest bit of fight choreography, Goku employs passive resistance to use his body as a decoy, flipping around his high school attackers and luring them to smash up both their cars and each other.

The fun slows down once the plot kicks in and Goku, PhD biker chick Bulma (Emmy Rossum, oddly), Master Roshi (Chow Yun-Fat), and stoner surfer trickster Yamcha (Joon Park) must collect the seven dragon balls before the evil Lord Piccolo (James Marsters) and his foxy henchwoman Mai (Eriko Tamura) use the Dragon Balls to destroy the world. That threat doesn't carry the weight it should, in large part due to James Wong's half-hearted direction and visual effects, which have the defanged flatness of an episode of Xena. At worst, the Apocalypse looks like a cheap laser show. The evil villain Piccolo (James Marsters) is a failed Las Vegas Blue Man. It's hard to muster up fear for the end of the civilization when the whole production looks like an hour of network filler. Movies like this make me wonder how on earth Hollywood spends so much on a flick. The budget for Dragonball is rumored to be between $50-$100 million—both numbers seem wildly incredible unless there's a jammed bank account near the Swiss Alps. If it cost that much every time Lucy Lawless came to the rescue, it'd bankrupt Bill Gates.

Luckily, the one other thing Dragonball Evolution shares with TV is its running length. Even though my screening started at 12:05, the credits rolled in time for the disappointed audience to make last callwell, time for those old enough to drink.